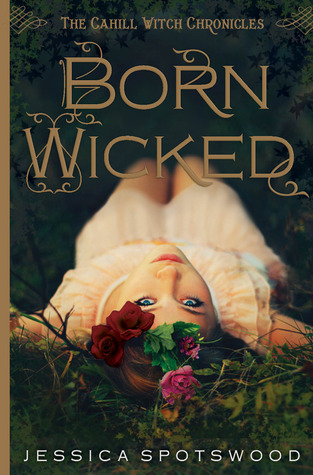 Witches, sisters, secrets, a prophecy, and forbidden romance mingle in Jessica Spotswood’s debut Born Wicked.  The historical alt reality description made me look twice at this book, even though I don’t normally gravitate to books about witches.  I listened to the audiobook and ended up thoroughly entertained and swept up by the delicious scandals. The first book of The Cahill Witch Chronicles is a lot of fun.

Born Wicked is the first book in a trilogy about three magically gifted sisters who have to hide their talents from the Brotherhood – priests who send suspected witches to insane asylums or prison. The oppressive Brothers long for the day of public hangings for witches, and in fact they have little regard for women in general.

Cate Cahill is the oldest of three sisters, all of whom are witches. Now almost seventeen, Cate must declare her purpose to either marry or join the religious Sisterhood. But, she pledged to her dying mother that she would protect her sisters from capture by the Brothers. She has never thought too much about romance, preferring to tend her gardens instead. But love is now a bigger consideration that a marriage offer is on the table from childhood friend Paul, and even more so when she starts falling for the booksellers son / family gardener Finn.  Now Cate has an impossible choice to make, along with a prophecy she desperately wants to prevent.

The book started out pleasantly enough, and I enjoyed getting the feel of late 1800s New England. Though the pace was a bit lagging at first, the set-up pays off, and soon I was looking for ways to keep listening to the story. The writing style also is lovely and goes perfectly with the books historical time frame.  It was easy to imagine the Cahill’s home and gardens, the tea parties, and dresses.

Cate is a strong main character, and fiercely protective of her sisters. It’s clear that she means to honor her commitment to watch over them, even though she comes off as the bad guy a lot of the time. She closely monitors their witchcraft activities and has an especially turbulent relationship with middle sister Maura. The youngest, Tess, doesn’t have as many scenes, but she stands out among the sisters, and is one I would like to know more about. I’m also interested to see what the Cahill sisters can do with their magic once it gets unleashed.

You may be shaking your head at the hint of a love triangle, but Cate knows where her heart lies and it’s really a non-issue. The kissing scenes are memorable and you can get a glimpse of one of the best scenes in the book trailer below.

In addition to the witchery and romance, the story also matter-of-factly takes on feminist topics, as Cate and her sisters are discouraged from being anything other than a wife or a Sister. Their outside interests such as books label the sisters as eccentric and outcasts, and the Brothers even seek to close down the bookshop for selling books they deem inappropriate.

Regarding the audio production, the book is read by Nicole Sudhaus. She reads with a pleasant no-nonsense voice for Cate and captures her feistiness and caring spirit well. Her reading suits the historical time frame and she reads with a nice clear tone and an even pace.  She sounds like the appropriate age for Cate, and delivers the needed emotional intensity with her narration. She differentiates the character voices well, including male and female voices of varying age and dialects. In the beginning I had trouble keeping track of the voices of the sisters, but I think I was still getting acclimated to the story.  When the story starts out slow in the beginning I had more patience with it because the audio kept me entertained, and as the story went on I went out of my way to do more household chores so I could keep listening. And the action packed conclusion had me clamoring for a sequel. I would be inclined to continue with audio for this series.

Recommended for fans of historical fiction, paranormal, and romance. Look for Born Wicked in stores today.