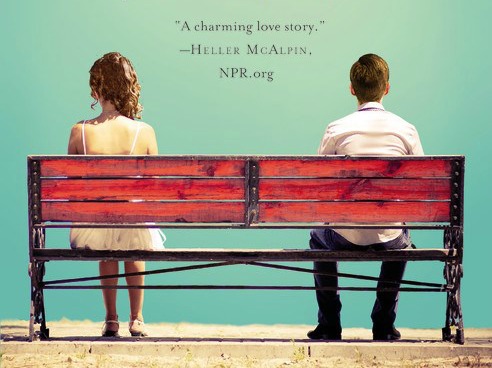 Jeff Bartsch’s debut Two Across hits shelves in paperback July 19 with a spiffy new look and I have a copy to giveaway to one lucky reader. I listened to this audiobook last year and said, “This is a fun and offbeat debut that made me appreciate the art (and romance) of the crossword puzzle!” I have to say I enjoyed the audiobook, but since the book is all about words and puzzles I think that print may be an even better way to experience it.

Two Across is set in the 1960’s book about two teenagers who have an awesome meet-cute when they tie for first place at the National Spelling Bee. Their relationship gets complicated over the years but they keep tabs on each other through their shared obsession: crossword puzzle construction. This is a fun crossover read that I think will appeal to readers who like unconventional rom-coms, Mad Men, and crossword puzzles. Read more about it and enter to win a copy for yourself: 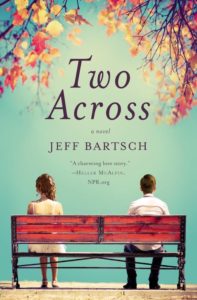 Highly awkward teenager Stanley Owens meets his match in beautiful, brainy Vera Baxter when they tie for first place in the annual National Spelling Bee-and the two form a bond that will change both of their lives.
Though their mothers have big plans for them-Stanley will become a senator, Vera a mathematics professor-neither wants to follow these pre-determined paths. So Stanley hatches a scheme to marry Vera in a sham wedding for the cash gifts, hoping they will enable him to pursue his one true love: crossword puzzle construction. In enlisting Vera to marry him, though, he neglects one variable: she’s secretly in love with him, which makes their counterfeit ceremony an exercise in misery for her.
Realizing the truth only after she’s moved away and cut him out of her life, Stanley tries to atone for his mistakes and win her back. But he’s unable to find her, until one day he comes across a puzzle whose clues make him think it could only have been created by Vera. Intrigued, he plays along, communicating back to her via his own gridded clues. But will they connect again before it’s all too late?

The paperback goes on sale July 19 and you can preorder it now:

Jeff Bartsch is an award-winning copywriter who has worked on campaigns for many major brands, received the D&D Young Guns Award, and been featured twice in Adweek‘s Spot of the Week. He studied creative writing at the University of Wisconsin, and held the Katey Lehman Fellowship in the MFA program at Penn State University. He lives in New York.

One reader will win:

Prizing courtesy of Grand Central Publishing, giveaway is open to US entrants age 18 and up. Fill out the Rafflecopter to enter!
a Rafflecopter giveaway

7 thoughts on “Two Across by Jeff Bartsch Paperback Giveaway”