You guys, my first favorite band was probably Duran Duran. They were huge in the 80s and started out around the same time as MTV, and the two were a match made in heaven. My friends and I all chose favorite band members, and mine was the bass player John Taylor. They were my first concert as a kid and I saw them at the height of their popularity. When they were on the top of the charts, I listened to their music religiously, but didn’t know all the sordid details and backstage stories behind the music. So, I was a captive audience listening to this audiobook to hear a founding band member’s perspective of life in Duran Duran. It’s an enjoyable trip down memory lane, honest but not too dishy, and a fascinating character portrait of a recovering drug addict and rock star. Since I have this nostalgic connection to the author I thought it would be fun to write out my thoughts on the audiobook as a letter to author JT. But, ultimately I chickened out so I’m going with a more traditional review. 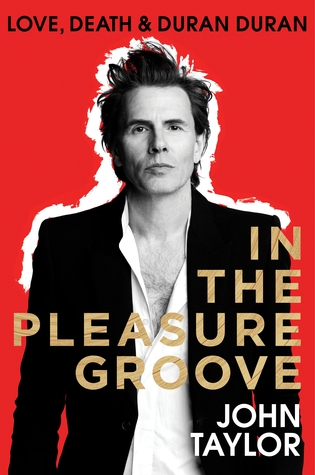 John grew up as Nigel John Taylor in England, an only child with loving, supportive parents.  He felt nerdy with the name Nigel and later shortened his name to John when Duran Duran formed. He founded Duran Duran with Nick Rhodes in 1978, and by 1980 the final line-up was in place, and soon worldwide domination and mass hysteria ensued.

Success happened very quickly and soon the band had to adjust to life on the road and the advantages and drawbacks of fame. With success came many temptations for John, and he is frank about discussing his problems with drug and alcohol abuse. He is unflinchingly honest about his own behavior, yet doesn’t thrown anyone else under the bus. Some of the stories he tells don’t show him under the best light and he doesn’t sugarcoat anything. I’m actually really glad I didn’t know about all this stuff at the time because it would have tarnished my image of the band, but now I can appreciate it for the engrossing rock memoir that it is.

The band always seemed like a collaborative effort on the outside and it was good to hear that that was actually the case. They truly were good friends, especially in the early years. John touches on his relationships with all the band members and the changes in the group over the years. John mostly focuses on 80s Duran Duran, and his reminisces of the later years focus on his own personal challenges and raising a family.

John’s writing is engaging and articulate, and I was fully absorbed throughout. The book has a good balance of stories about family life including his relationship with his parents, romantic life, band life, and drugs and recovery. I love that John Taylor narrates his audiobook so it adds that personal touch. And since it’s his story, you can hear the smile in his voice, or alternately remorse and other emotions as he reads. It would have been cool if music clips were included because you’ll probably be inspired to check out old songs as you listen to the audiobook. The book version comes with a lot of photographs that enhance the reading experience, but audiobook listeners should not feel left out. You can view the photographic content on audible.com.

I think this biography will appeal to, of course, fans of Duran Duran, but also fans of rock bios, and music fans in general. John is a big music buff and describes his experiences seeing bands in the 70s and 80s, including the time he heckled Sting at a Police concert. He also has an inspiring story to share about dealing with his addictions and settling down. The biography is told with honesty and humor, and may not be sordid enough for some, but I thought it was very classy. Once a Duranie, always a Duranie I guess!

I received In the Pleasure Groove: Love, Death & Duran Duran by John Taylor for review from Penguin Audio. The audiobook is 7 hours and 55 minutes long and is on sale now. It is also available in hardcover from Dutton Adult.