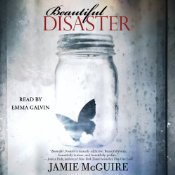 Beautiful Disaster is a book that has been on my radar for a while.  I’ve heard some things about it, both positive and negative, that made me wary to read it.  But, I’ve been exploring the New Adult genre lately, and I decided to check out the audiobook. Though I didn’t think the book was perfect, I was entertained. Beautiful Disaster is intense and over the top but it’s certainly a gripping story.

In Beautiful Disaster, Abby and her BFF America go to college together at Eastern University. Abby is trying to escape from her dark past and start a new life, and America fully supports her. Abby doesn’t want any drama, and works toward being a model student. When she attends the local fight club with America and her boyfriend Shepley, she meets Shepley’s cousin, Travis “Mad Dog” Maddox, fight club champion, and just the kind of trouble she wanted to avoid.

Travis has a reputation as a lady-killer, and is a tattooed, smoking, drinking, motorcycle riding badass with a volatile personality. And, he’s set his sights on Abby. He’s exactly what Abby doesn’t want in her life right now.  But, he’s relentlessly persistent, and she decides to give friendship a try.  When Abby loses to Travis in a bet, she has to live with him for 30 days, which fast tracks their relationship.

A lot of the book is about the dysfunctional, crazy relationship between Abby and Travis. He is obsessive, jealous, and possessive and Abby alternately loves it or runs away from it. Part of the mystery is her past, and once we understand where she’s coming from, her reluctant attraction to Travis makes sense. Though if this were real life, I think her friends would say, “Run away, Abby!” because their relationship is very unhealthy. I was strangely fascinated by the back and forth relationship though, and absorbed with each dark turn. I wasn’t crazy about Travis’s nickname for Abby though – he calls her pigeon constantly.

The secondary characters America and Shepley help to keep the story grounded.  Both are very good friends to the couple. And Travis’ dad and brothers also entertain. The tumultuous twosome even get a dog, Toto, who I found myself worrying about due to Travis and Abby’s frequent absences.

Audiobook narrator extraordinaire Emma Galvin reads the audiobook. I swear she’s a chameleon, and can transform her voice to suit any character. She brings sass and personality to the characters, and delivers a spot-on reading for the Travis and Abby characters.  Galvin reads with intensity that ramps up the drama of the story. Though the story is crazy at times, I was addicted to the audiobook.

I can’t say this book will be for everyone, and the mature content may offend some readers. But if you like edgier, new adult, or contemporary romance, I think it’s worth a read. And, there’s even a movie adaptation on the way, with Warner Bros. snapping up the film rights. A companion book, Walking Disaster, due out in April 2013, tells Travis’s side of the story, and I don’t think I’ll be able to stay away.

Emma Galvin talks a little about the audiobook here: