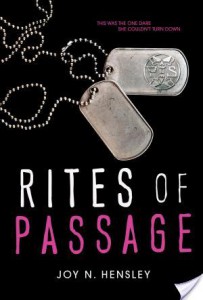 In this fast-paced, high-stakes debut novel, sixteen-year-old Sam McKenna discovers that becoming one of the first girls to attend a revered military academy means living with a target on her back. As Sam struggles to prove herself, she learns that a decades-old secret society is alive and active . . . and determined to force her out. Fans of Simone Elkeles and Trish Doller will love Rites of Passage’s perfect blend of sizzling romance and edge-of-your-seat suspense.

In Rites of Passage, Sam is one of the first girls to attend the exclusive Denmark Military Academy, and the guys are none too pleased to have her.

Sam McKenna has military pedigree – her father is a respected Lieutenant Colonel, her brother Jonathan is the cadet colonel at DMA, and her late brother Amos was a Ranger who dared Sam to enroll in the first place. But the McKenna name hurts rather than helps Sam. It makes her the most visible target of those who think women will ruin “the finest military school in the country.” She’s one of five girls starting at the academy and the odds are against them making it through the first week of training, let alone the first year.

Man, this is one absorbing story! I was up late reading Rites of Passage, dying to know how things would work out for Sam. Debut author Joy N. Hensley includes lots of authentic details in this vivid look of military academy life, and this story is action packed. I read the author’s bio and was not surprised to see that like Sam, she also attended military school (and on a dare!) I just flew through this book.

Sam is a kick-ass heroine with the determination to succeed. She’s the subject of the kind of hazing, bullying, and intimidation that would make anyone want to go AWOL. And though she’s bound by her love to her older brother and his dare, she also sees that she has the chance to make a real difference for future girl enrollees. There is a real girl power theme, with Sam looking out for the other girl recruits, even when they don’t always have her back.

There are a lot of secrets in this military academy. Secret societies and alliances scheme to push out the girls. But Sam has some allies of her own to help with the detective work. Some of the villains are blatant with their threats and so cruel to Sam it riles you up. But on the flipside there are some good people there who want Sam to succeed.

The family theme runs throughout the book, and Sam’s family life is complicated. She’s pretty isolated from her family now that she’s at the academy and is working through the death of her brother, and missing her parents. With all the stress at school, Sam’s brother Jonathan is avoiding her as well. It’s inspiring to see Sam hold herself up when she has such little support.

There is a little bit of a forbidden romance in this book. One of the older students, called Drill (for drill sergeant) sees great potential in Sam and he looks out for her. It’s forbidden for them to date for several reasons, but there are some sweet moments and definite chemistry there.

The ending is exciting and satisfying and sets up some interesting challenges for the future. I was happy with the realistic conclusion and that it was a little messy. But at the same time, I love these characters and this setting and would really like to follow their adventures in another book. At this time, this book is a standalone, so heads up that you may feel some frustration at the end.

Joy N. Hensley has written a first-class debut here that no doubt will be a year-end favorite. And it’s a book that’s most likely to inspire you to get your butt in gear. I’m eager to read her next book, called The Harder You Fall, and due out next year. It’s about “a girl in the world of mixed martial arts.”

Read Rites of Passage if you like: Realistic Fiction, strong female protagonists, Military-themed YA (Something Like Normal, The Impossible Knife of Memory, In Honor, and If I Lie are some of my favorites) and action/adventure stories. Just read it! 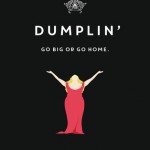 2 thoughts on “Rites of Passage by Joy N. Hensley”