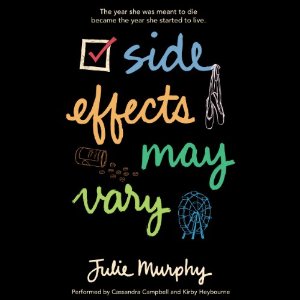 Reading Experiences May Vary: the lowdown on Side Effects May Vary

1. What’s the Story? – Julie Murphy’s debut Side Effects May Vary is an unconventional cancer book, with an unpleasant protagonist. What happens when you’re supposed to die, and you even complete your bucket list, but you beat the odds and survive? How do you live with the decisions you made when you thought you were dying?

2. Petulant Protagonist – Much of your reading experience will depend on how you react to Alice as a character. She is difficult to say the least. She uses her cancer bucket list as a way to exact revenge on her jerk of an ex (Luke) and her adversary (Celeste) that stole him. I don’t mind flawed characters and I appreciate the unconventional approach Murphy takes with Alice’s character- she makes a cancer patient unsympathetic. But personally I thought Alice’s character made this book a chore to read at times.

3. Time (Clock of the Heart) – Side Effects has a “Now” and “Then” device, that illustrates where we are now (cancer remission), and how we got there with then (living with cancer, bucket list). Time jumps between now and then, introducing pieces of the puzzle to put together throughout the book.

4. He Said, She Said – In addition to the now and then story structure, Side Effects features dual perspective, with Alice and Harvey (her long-suffering friend/love interest) taking alternate chapters. This was a good choice for this book. Alice and Harvey don’t have the best communication so being in their heads allow us to see where they’re coming from.

5. Love Story – Alice and Harvey grew up together since their parents are best friends. Harvey loves Alice and she strings him along for much of the book. They are not best friends or boyfriend-girlfriend, but something undefinable that makes for a messy, misunderstood relationship. I can’t say I shipped this pairing and I wanted so much more for good guy Harvey.

6. Mean Girls – This is probably the first revenge/cancer book I’ve read, and the pranks in this book take a page right out of Carrie.

7. Ballerina out of Control – Another activity that links Alice and Harvey is ballet. Harvey’s mom runs a dance studio, where Alice danced and Harvey played piano. Alice is a gifted dancer, but isn’t sure if she wants to stick with it. Now that she’s well, can she find her way back to the studio?

8. Reach for the Stars – Alice and Harvey have some growing to do in this book. Alice has to learn to live now that she has the opportunity, and Harvey also has to decide if he can move on from Alice, or what if any relationship they can have. There is character growth, and it’s realistically portrayed. Nothing is going to come easy for these two or change overnight, and that’s okay.

9. Side Effects soundtrack – Music is not a big focal point of the book, but I do like the playlist the author put together. Like the book, the songs have a lot of attitude and convey the up and down emotions of Alice and Harvey:

10. Listen to this audiobook and call me in the morning – I listened to the Side Effects May Vary audiobook, performed by Cassandra Campbell and Kirby Heyborne. Cassandra Campbell made the voice of Alice a little more palatable. Though Alice’s words and actions are harmful at times, Campbell’s performance is fair to the character and she doesn’t make her sound like a monster. You could feel her emotional struggle and torment in her voice. Kirby Heyborne’s Harvey performance is gentle like the character, and matures over the course of the book. Heyborne is a good choice for nice guy characters, though he is certainly capable of conveying the frustration and intensity of the character as well. Though the performances were satisfying, this is not a book I wanted to listen to all the time, due to the nature of the story.

Doctor’s Note: Julie Murphy breaks the norm with her unique cancer story. The unlikable main character is something we don’t see everyday, and though she’s hard to take at times, different personalities make the world go ’round. How boring to always read about the same type of character, right? Side Effects May Vary is on sale now, and Dumplin’, a new contemporary story is due out next year.