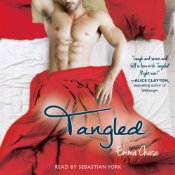 Drew Evans is handsome and arrogant, he makes multimillion dollar business deals and seduces New York’s most beautiful women with just a smile. So why has he been shuttered in his apartment for seven days, miserable and depressed? He’ll tell you he has the flu. But we all know that’s not really true.

Katherine Brooks is brilliant, beautiful and ambitious. When Kate is hired as the new associate at Drew’s father’s investment banking firm, every aspect of the dashing playboy’s life is thrown into a tailspin. The professional competition she brings is unnerving, his attraction to her is distracting, his failure to entice her into his bed is exasperating.

Tangled is not your mother’s romance audiobook. It is an outrageous, passionate, witty narrative about a man who knows a lot about women…just not as much as he thinks. As he tells his story, Drew learns the one thing he never wanted in life, is the only thing he can’t live without. (Source: Audible)

OK so obviously with a cover like Tangled you know we have strayed from YA territory. I always wonder whether I should talk about any contemporary romance I read on the blog, or if I should have a new segment called “The Reading Date After Dark.” Anyway, I read a mix of genres so I don’t burn out on any one thing. Hope you don’t mind when I sneak in something more “adult.”

I first heard about Tangled (last year?) when it was a self-published success. Author Emma Chase won Debut Goodreads Author in the Goodreads Choice Awards for Tangled, and now the book has a wider distribution from the partnership with Simon & Schuster. This book obviously has a lot of fans on GR so I wanted to give it a shot.

One thing that differentiates Tangled from other contemporary romance books is that it’s told from a male perspective. Drew thinks he’s God’s gift to women and he relays his story like he’s talking to the reader over drinks at a bar. He’s arrogant and crude and tells it like it is. Everything changes though after he meets Kate. The taming of the womanizer is a familiar trope, but the witty tone of the book makes the story feel fresh.

Tangled reminded me of Christina Lauren’s Beautiful Bastard series. Like that series, Tangled doesn’t take itself too seriously and it’s a light, funny, steamy romance. The male pov is refreshing and added more mystery about the love interest than the typical dual perspective romance. The characters have great chemistry and lively banter and it’s nice to see the guy who always gets the girl have to work for it. Kate is a force to be reckoned with and I liked seeing the two push each other’s buttons.

Tangled reminded me of a classic rom-com with all of the humorous scenes, sharp dialogue and messy romance. I was entertained even though I hated myself a little for liking Drew. But, points to Chase for turning the typical romance on its ear.

I listened to the audiobook, performed by Sebastian York (he also performs three books in the aforementioned Beautiful Bastard series.) York performs the voice of the player to perfection. He really gets the humor of the book and the character of Drew plays to his strengths as a narrator. York uses different voices and accents in the book (characters include an Irish nun and a preschooler) and I liked his portrayal of sassy Kate. York’s voice is easy on the ears and I think the audio is a good way to go for this romance.

Tangled is the first book in a series, and the second book (Twisted) is from Kate’s perspective, and due out this March. Book three (Tamed) is about another couple from the Tangled universe. Have you read Tangled– what did you think?

Here’s an audio clip from Tangled performed by Sebastian York:

Best of 2013 – Audiobooks
Three is a Magic Number – Blogoversary Giveaway