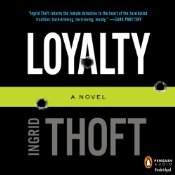 The Ludlows are a hard-charging family, and patriarch Carl Ludlow treats his offspring like employees – which they are. But his daughter, Fina, is a bit of a black sheep. A law school dropout, her father keeps her in the fold as the firm’s private investigator, working alongside her brothers.

Juggling her family of high-powered (and highly dysfunctional) attorneys, the cops, and Boston’s criminal element is usually something Fina does without breaking a sweat. But when her sister-in-law disappears, she’s caught up in a case unlike any she’s encountered before.

Carl wants things resolved without police interference, but the deeper Fina digs, the more impossible that seems. The Ludlows close ranks, and her brother Rand and his unruly teenage daughter Haley grow mysteriously distant from the family. As Fina unearths more dirt, the demands of family loyalty intensify. But Fina is after the truth – no matter the cost.

I don’t read as many mysteries as I used to, but I saw Entertainment Weekly’s A- review of Loyalty and it sounded like a fun summer read. Loyalty takes place in Boston and is about a PI named Fina Ludlow who is investigating the disappearance of her sister-in-law. There are surprises, action, family drama, a little romance, and a lot of junk food in Loyalty. And even though mystery not my preferred genre, I got through the audiobook quickly, wanting to solve the crime. I may have to give more mysteries a try!

Fina is from a large family of lawyers, the notorious Ludlow’s. With a family that has so many enemies, how do you nail down a suspect in the case? Fina is in the unique position of being related to the missing person, and hired by the family to defend her brother and break the case. The Ludlow’s have a lot of power but also some skeletons in the closet, so Fina has her work cut out for her.

The city of Boston is used to advantage as the setting of Loyalty, with many familiar streets and landmarks making an appearance. And the food! Fina works around the clock on the investigation but always has time to have some decadent dessert, fast food, or tasty beverage.

There is a large cast of characters in Loyalty. Fina has brothers, parents, and nieces and nephews. It took me a while to get everyone straight! Plus, she is very connected and has friends all over to feed her information. Sometimes business and pleasure mix as Fina likes to work hard and play hard.

I listened to the audiobook of Loyalty, read by Rebecca Soler. I’m a fan of Soler’s narration from the Lunar Chronicles series, and After. She is such a chameleon, and in this book uses several accents to nail down the Boston flavor of the story. Since there are so many characters in Loyalty, it was very helpful that Soler gave each character a distinct voice to help the listener keep track of them all. Soler makes Fina’s dialogue sound appropriately tough and snappy. I haven’t spent a lot of time in Boston, but her accent sounded good to me, and Soler mentioned on Twitter that she grew up in Boston so there you go. You can tell Soler had fun inhabiting the different characters in the story, and I could easily envision the setting through her narration. I’d definitely pick up the sequel of Loyalty in audiobook form.

Loyalty is Ingrid Thoft’s debut novel and it’s a strong, smart start to a new series. I liked the humor, action, and characters, and Thoft’s polished writing style. I hope our heroine Fina has more time for romance in the next book- I’m curious to see how that story progresses. The mystery in Loyalty was appropriately twisty and the ending sets up more drama for the sequel. I’ll be along for the ride.