Before You Break is the second book in the New Adult Between Breaths trilogy. I devoured the first book, All Of You, and was so excited to continue the series with Before You Break. Each book focuses on a different couple so it’s completely fine to read as a standalone. Before You Break focuses on a girl who volunteers at a suicide hotline. She helps one of the repeat callers, and later finds out the caller is the same guy (a college baseball catcher!) she has a crush on.

More about Before You Break: 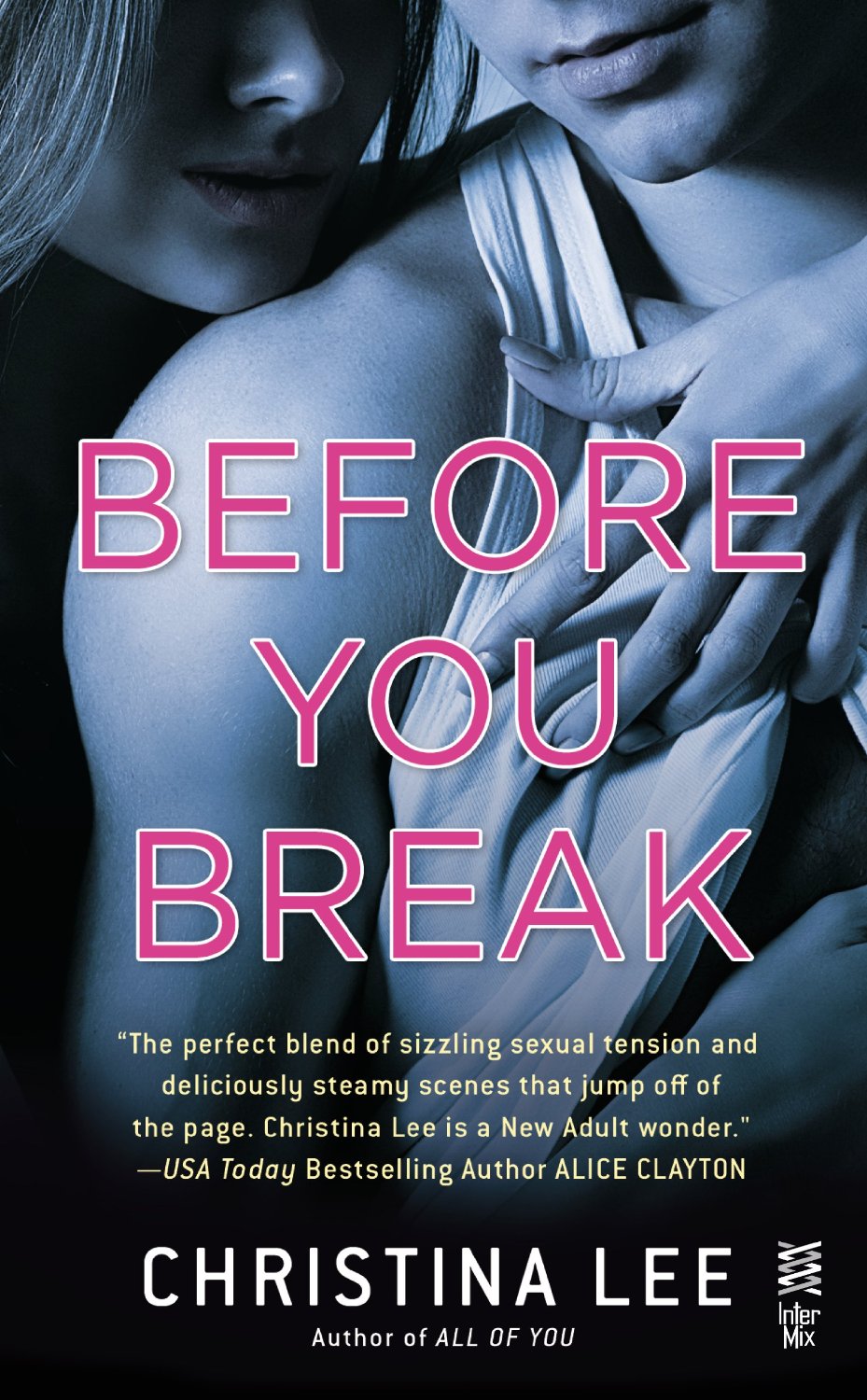 A sexy, emotional New Adult romance about a bad boy on the edge and a good girl about to lose control…

A college baseball star isn’t supposed to have skeletons in his closet. But Daniel Quinn is hiding a guilty past so dark he refuses to let anyone get close. Except there’s something about gorgeous, studious Ella Abrams that goes beyond the electric attraction between them–something that makes him want to open up.

Ella has suffered enough heartache and guilt to fill one of her psychology textbooks, but she keeps that part of herself hidden behind a bubbly exterior. Until she receives an anonymous call while working a suicide helpline and the voice on the other end touches something inside of her that she can’t ignore.

Soon Ella and Quinn’s physical connection heats up, even as their deep and revealing hotline talks intensify. But by the time Ella realizes that her seductive jock and her sensitive caller are the same guy, it might be too late to save him–or to stop herself from falling too far…

All Of You was a bright spot in my New Adult reading last year, so I was eager to pick up the sequel, Before You Break. I like this series because of the unconventional romantic pairings, and that the couples have interesting stories to tell beyond their love story. The heat is still there, mind you, but it’s not wall-to-wall passion so the stories don’t feel repetitive.

In Before You Break, Ella and Quinn are casual friends separately grieving a loss in their lives. Quinn lost his best friend in a tragic accident and is racked with guilt, while Ella lost her brother to suicide. Both characters deal with their loss by holding onto the things their loved ones held dear.

In Quinn’s case, he plays baseball and lives in a frat house, because that was his friends’ dream. He himself loves to work on cars, but his new plan appeases his politician father and so he stays the course.

Ella, meanwhile, stays with a jerk of a boyfriend because of his connection to her brother. Everyone knows he cheats on her but she feels some sort of loyalty to him. Her brother’s death is the catalyst to her wanting to work in psychology and to save lives, since she also feels some guilt over her brothers’ death.

Ella and Quinn get to know each other because Ella frequently visits his frat house to see her boyfriend. Talking to Quinn helps her realize she deserves something better in a boyfriend. Ella doesn’t cheat on her boyfriend, but has to end things for her own sanity, even if nothing happens with Quinn.

There’s a little twist to the story when Quinn calls Ella’s suicide prevention hotline in distress. He calls her Gabby, and she calls him Daniel so they don’t know they are talking to each other.  This goes on for quite awhile, and I wondered how they didn’t recognize each other’s voices. But Quinn can’t open up to Ella, the way Daniel can open up to Gabby (confused yet?) and their phone calls help them both to heal.

Ella is friends with Avery, the main character of the companion book All Of You. We get to catch up with Avery and her boyfriend Bennett in this book, so that is a bonus if you have read the first book. We also get to know Ella’s family. Ella comes from a friendly Polish family who hold big family dinners. Their family was a nice contrast to Quinn’s more remote parents.

The romance takes its time, just as in All Of You. I like slow burn romance like this and it made sense for this couple in particular to take it slow. It was sweet also that their dual personalities hit it off on the phone, and had great chemistry in person as well. I was nervous to see what would happen when that secret was revealed.

In All Of You the story was all in Avery’s POV, but in Before You Break there is a dual narrative, which I liked. Quinn and Ella are private and guarded so it was helpful to get to know them better through their alternating chapters.

Before You Break is a heavy sort of NA book, considering the themes of grief, guilt and moving on. I do prefer these sorts of stories, so I connected to this book probably even more than All Of You. Christina Lee strikes a good balance between the emotional and romantic side of the story and made me want Quinn and Ella to heal and find their way toward each other.

I’m looking forward to the next book in the series and hope we get to check in with the characters in All Of You and Before You Break again.

Series order for the Between Breaths trilogy:

Here’s a sneak peak of Before You Break from Penguin InterMix. It’s a scene featuring Quinn and Ella on a movie date:

At the theater, we bought popcorn, Milk Duds, and large sodas. After we settled in our seats in the crowded room, I opened the box of chocolate caramel confections and dumped them in the large tub.

“Sweet and salty—it’s a must-have for movie watching.”

“Yes, seriously.” I picked up a Milk Dud, flanked it with two pieces of popcorn, and then brought it to his lips. “Here. I guarantee you’ll fall in love. You’ll never watch a movie without them again.”

“If you say so. . . .” He dragged the sweet and salty mixture into his mouth but kept my fingers enclosed between his lips. I held in a gasp while he ran his tongue over my thumb and then sucked on my forefinger before releasing my hand and chewing what remained.

“Agree,” he said around a mouthful of popcorn. “Wouldn’t want to be without them ever again.”

Quinn’s gaze latched on to mine. It felt like a bundle of feathers had been let loose in my stomach. “Guess you’ll have to come to every movie from now on. So I don’t forget.”

Speechless wasn’t even the word for what I felt in that moment. Dumbfounded might have been more like it, or maybe just struck stupid, because I couldn’t even move my lips to form any coherent words.

When the movie previews began, he turned toward the screen and reached for my fingers, interlacing our hands. Then he leaned close to my ear and said, “I expect you to feed me just like that the entire movie.”

Add Before You Break to your digital bookshelf: Amazon * BN * iBooks * Google Books

Look for Before You Break to hit trade paperback October 14, and All Of You July 1.

Enter the Rafflecopter Giveaway for your chance to win all sorts of great prizes including Amazon gift cards, books, jewelry, and swag.

One thought on “Before You Break by Christina Lee Review, Excerpt and Giveaway”