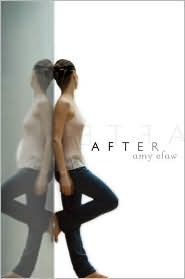 After is not a title I would normally gravitate to. Fifteen-year-old gets pregnant and dumps her baby in the trash? Doesn’t sound like my cup of tea. But I saw the title listed as a library mp3 audiobook and that Cinder’s Rebecca Soler narrated it and decided to take a chance. The story is actually strangely compelling and I was surprised to find myself riveted. The author makes the impossible possible and makes you feel empathy towards this girl.

As the title suggests, After starts off after a traumatic event has occurred. Devon is a star soccer player and honor student with a bright future ahead. She has taken on a lot of responsibility at home and with extracurricular activities and babysitting but seems to have it all under control. She is in complete denial, though, over an unexpected pregnancy and wants to make the problem go away without anyone knowing a thing about it. When she gets caught, Devon finds herself in the juvenile system facing an attempted murder charge. Her secrets have caught up with her at last and Devon must face up to her actions and what led her down this road.

Devon is so shell shocked and in deep denial about the whole situation. She is stuck in her own little world and doesn’t seem to grasp the trouble she’s in or even what exactly has happened.  Keeping a secret of that magnitude has taken its toll and through flashbacks we get a glimpse of what happened to land Devon in this predicament. Her behavior rang true and seemed realistic for her age though it’s not easy to be inside her head. I found myself able to connect with her and understand her thought process, much to my surprise.

The story is set partially in a juvenile detention center where we get to know the other girls there. Devon is detached at the beginning but finds that she has more in common with the other girls than she expected. The book is also part courtroom drama as Devon has meetings with her lawyer Dom who is fighting for Devon to be tried as a juvenile rather than an adult. The court scenes are fascinating and an effective storytelling device for Devon’s situation.

Rebecca Soler does a very good job with the narration, and conveying Devon’s feelings of isolation, confusion, and remorse, so that everyone else seems bright and alive by comparison. She made the story feel more real as Devon’s pain and desperation cuts through. She also brought life to the other characters such as Devon’s mother, lawyer and the girls at the detention center. I’ll definitely look for more audiobooks by this narrator.

After is an engrossing character study and a powerful book. I found the character development really satisfying and the plot very readable and engaging. The subject matter is difficult but the writing makes it a worthwhile read.

7 thoughts on “After by Amy Efaw: Audiobook Review”