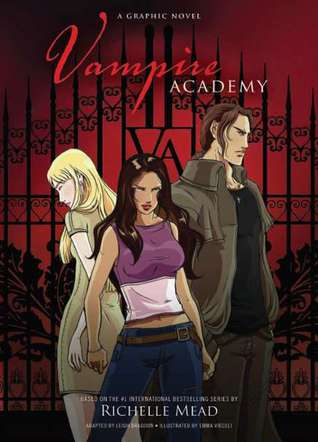 Publisher’s summary:
After two years on the run, best friends Rose and Lissa are caught and returned to St. Vladimir’s Academy, a private high school for vampires and half-bloods. It’s filled with intrigue, danger – and even romance. Enter their dark, fascinating world through a new series of 144-page full-color graphic novels. The entire first Vampire Academy novel has been adapted for book one by Leigh Dragoon and overseen by Richelle Mead, while the beautiful art of acclaimed British illustrator Emma Vieceli brings the story to life.

Vampire Academy is the latest young adult series to get the graphic novel treatment, as we have seen recently with the Twilight series. As Vampire Academy is a favorite series of mine, I have a picture in my head of what the characters look like and I wondered how the graphic novel would compare. The writing in Vampire Academy is so descriptive and vivid it would seem to lend itself well to this format. This graphic novel is a fast paced and quick read, and surprisingly manages to include the entire story of the first book in its slim volume. Recommended for fans of the series and for those who want a quick visual look at what the series is all about.

I have not read too many graphic novels, but I found the artwork to be striking, and the emotions of the characters came through the pages. It is a treat to revisit a familiar story in this visual format and see scenes from the book come alive in the pages. The characters that most lined up with my expectations are Rose, Christian and Mason. Rose looks physically as I would expect and her tough and feisty yet vulnerable demeanor shines through. Dimitri looks a bit different than I would expect. He is more bulked up than I imagined, but at least he’s wearing his familiar brown duster and reading western novels. Even though the characters did not always line up with my expectations, I enjoyed looking at the scenes in this visual format. It gave me the opportunity to view the book again with fresh eyes.

The adaptation is impressive considering most of the major plot points are included from the original 332 page book. The book moves very swiftly through the story so every scene is important. Due to the book’s length and pacing some of the plot details are not fleshed out, so you may get more out of it if you have read the book first. The graphic novel does do a good job with getting the main points across and with the character traits.

The graphic novel is recommended for young adults due to language and sexual situations, as in the original book. The colorful graphic novel will make a great addition to your Vampire Academy library and give you a new way to look at the story. Graphic novel fans should enjoy reading this to get a taste of the Vampire Academy world before diving into the books.

This book will be released on August 23, the same day as Bloodlines.

The Giveaway has ended and the winner has been notified. Thanks to all who entered!

Envy by Gregg Olsen: Review and Giveaway
Mailbox Monday #30
YA Audiobook Giveaway
IN THE AFTERLIGHT by Alexandra Bracken: Telekinesis Prize Pack Giveaway
If He Had Been With Me By Laura Nowlin Book Review