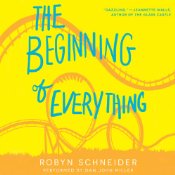 Book: The Beginning of Everything by Robyn Schneider, Harper Audio, August 27, 2013

Quirky, smart contemporary books are some of my favorite reads, and that was what I hoped to find when I picked up The Beginning of Everything.  This book first got my attention with its off-beat original title Severed Heads, Broken Hearts (which I still prefer!) Though the title has changed, the story still has a smidge of a black comedy vibe to it. The story has layers to it, some of the twists are predictable, but overall I enjoyed it.

The Beginning of Everything is about senior Ezra Faulkner, former tennis star Golden Boy. Ezra shattered his knee in a car accident, ending his tennis career, and with Ezra sidelined, his girlfriend moved on to another athlete. Ezra’s always been smart and takes AP classes, though he kept that on the down low. Now he’s in the unique position to reinvent himself as a member of the debate team. He meets a new girl in school, Cassidy Thorpe, and she mentors him on the debate team and gets Ezra thinking about the future, and about escaping the panopticon.

Cassidy is a little mysterious, unattainable, MPDG type. She was a debate champion at another school and is reluctant to get back into the debate scene. She is just who Ezra needs at this time of flux and they are all kinds of perfect together, though their relationship is a little like the rollercoaster featured on the cover.

Ezra leaves the jock lunch table behind for a seat with the debate team, an adjustment for his old and new friends. It’s not easy to change your clique in senior year, but Ezra seems level headed enough to adjust. The popular crowd is portrayed as the stereotypical jock and mean girl types while the debate crew is more intellectual but likes to have fun with silent flash mobs at The Grove, and hotel room partying on debate field trips.

Pop culture references aplenty figure into the book, with gaming, bands, literature, and sparkly vampires name-dropped. And there’s even Ezra’s cute dog Cooper that he says reminds him of Jay Gatsby. These references keep the tone light and breezy even though some serious topics arise.

Robyn Schneider does a great job with making the male voice sound natural and believable. Her writing is fresh and witty, and at times I wished that I read the book rather than listen to the audio so I could stop and appreciate her words more.

I listened to the audiobook, read by Dan John Miller (he also narrates John Green’s Paper Towns). Miller reads the book with a California type of laid-back voice. His voice matched well to relaxed Ezra’s demeanor and he has a deadpan delivery. I didn’t love his female voices though, which sounded like how guys sound when they try to mimic valley girls. The reading pace was a little slower than I prefer, matching Ezra’s character I guess, and the narration took me out of the story at times. Check out a sample to see if the reader is a good fit for you.

The rollercoaster pictured on the cover figures into the story, and actually a scene in the book takes place on Disneyland’s Big Thunder Mountain Railroad, and got under my skin so much I was having Disneyland dreams the nights I was reading the book.

The Beginning of Everything is an interesting coming of age with a strong male voice that should appeal to fans of quirky contemporary.

8 thoughts on “The Beginning of Everything Audiobook Review”