The Movie Date is a weekly feature where we discuss movies that may appeal to the YA audience. Andrew is The Reading Date’s resident movie critic and this week he discusses WHEN MARNIE WAS THERE, a Studio Ghibli film by Hiromasa Yonebayashi, based on the YA book by Joan G. Robinson. 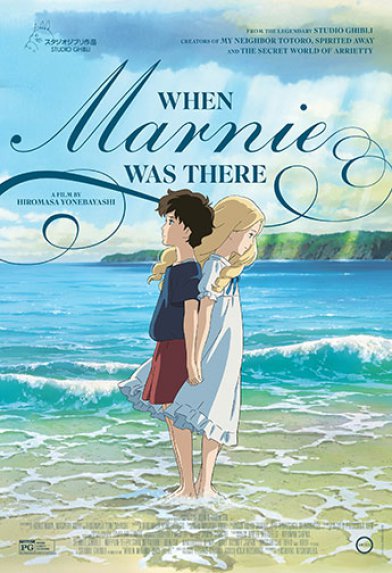 If you love fantasy, humor, sentimentality, and imagination, surely by now you’ve discovered the films of Japanese animation house Studio Ghibli. The company’s most renowned films—Princess Mononoke, Spirited Away, Howl’s Moving Castle, Ponyo—are all directed by Hayao Miyazaki, but he’s only one of about half a dozen directors at the studio. Hiromasa Yonebayashi, who gave us The Secret World of Arrietty, brings us one of Ghibli’s most down-to-earth yet moving films yet. 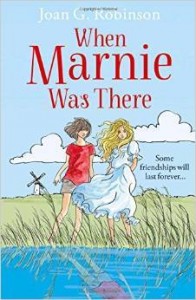 Based on a 1967 YA novel much beloved by Miyazaki, the film finds Sapporo schoolgirl Anna ailing in both body and soul. Her newfound depression and social anxiety are worsened by a case of asthma; in hopes of healing Anna’s woes, her loving foster mother puts the girl on a train to stay with relatives in the tiny town of Kushiro. The clear coastal air helps her lungs, and long days sketching and strolling do her heart good, too.

Anna becomes obsessed with a waterfront mansion that she can only walk to at low tide. Late one night, the bay filled with water, Anna is surprised to find a boat left for her; rowing awkwardly to the house, she meets Marnie, a blonde girl in a nightgown, who gives her an enthusiastic welcome. After developing a warm, secret friendship, the two attend a party thrown by Marnie’s parents at the mansion, where everyone is in period dress. Returning to the home the next day, though, Anna finds the place empty and long derelict. As new residents take over, Sayaka, another young girl, befriends Anna and shares with her a prize she’s found in the house: the diary of the now-missing Marnie…

Unusually for a Ghibli picture, there are no talking creatures or misshapen beasts (I don’t even think there’s a pet cat!). Instead, this is a very human tale about hidden histories and absent loved ones. Like the early Miyazaki film My Neighbor Totoro, this unusual story arc has no villain or antagonist; instead the tale is driven by mystery and curiosity. And like that film, When Marnie Was There offers a relaxing, gorgeously visualized vacation in rural Japan. Realistically, Anna’s depression is not magically dispelled, but the film ends with great hope: she has learned that to move forward one must sometimes confront one’s past.

WHEN MARNIE WAS THERE is now playing in select theaters in either dubbed or subtitled versions (we saw the latter.) Check out the viewing schedule to see when it’s playing at a theater near you. This film is Rated PG and runs 103 minutes. HarperCollins released a film tie-in version of the YA book so you can compare the two.

2 thoughts on “The Movie Date: When Marnie Was There”