The Movie Date is a weekly feature where we discuss movies that may appeal to the YA audience. This week’s movie date with Andrew is Happy-Go-Lucky, a 2008 film directed by Mike Leigh. 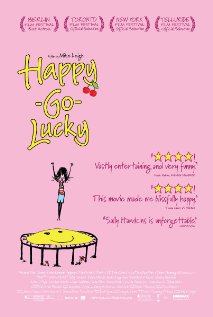 “Reality… don’t want to be goin’ there!”

That’s the very first line in this sweet, uplifting film as plucky, eternally optimistic Poppy (Sally Hawkins) is reading a book title in a bookstore. After attempting to bring some levity into the life of a dour shopkeeper (“I don’t bite!”), she steps outside to find her bicycle stolen. Does she spend the day searching for it? Does she vow vengeance against the thief? Nope, she just shrugs sadly—“I never got to say a proper goodbye”—and trudges cheerfully home.

At the end of the film, Poppy’s longtime roommate advises, “You can’t make everyone happy,” and Poppy wistfully replies, “There’s no harm in trying, though, is there?” Poppy is a beautiful, bright spirit, with a bold, eclectic wardrobe pillaged from Cyndi Lauper and Stevie Nicks, who’s made it her mission to spread happiness to everyone she meets. Her ministry of cheer might become obnoxious except for the chatty, self-deprecating way she expresses herself, and her goofy habit of smiling with her tongue between her teeth. Poppy’s not trying to be a pest but she can’t help herself: Life is short and joy is infectious.

Poppy lives in London, a primary-school teacher by day and girls-night-out partier after dark. Though single, unwealthy, and aimless at thirty, she’s completely happy with her life, so much so that she makes her pregnant, well-to-do sister jealous. The film meanders on for most of its length with little plot or conflict, simply showing vignettes of Poppy’s happy-go-lucky life. (I kept waiting for the Hollywood script twists of family trauma, terminal illness, cruel heartbreak, etc. but thankfully they never came.) Yet I found myself riveted to the film all the same, perhaps because I was so intent for Poppy’s battle against the ordinary to be ever victorious.

The backbone of the film is probably the series of discussions Poppy has with her new driving instructor (knowing she could never replace her beloved bicycle, she’s decided to try a new mode of transport). As she struggles to loosen up strange, tightly wound trainer Scott, we suspect that he may be growing interested in her. At the same time, she sparks a relationship with a young social worker at her school brought in to treat a violent student. The film does reach a heart-pounding climax, but it’s resolved with dignity and humanity, and the finale finds Poppy as optimistic and genuine as ever.

This is my introduction to British director Mike Leigh. Though he’s known more for intense personal dramas such as Secrets and Lies and Another Year, this film is straight-up sweet and positive. He apparently develops his films not from a script but through improvisations with his actors that eventually lead to stories. That’s easy to believe here; Sally Hawkins absolutely inhabits the part of Poppy. She looks a bit like Sandra Bullock and has the blithe cheer of Sixties actress Rita Tushingham (A Taste of Honey). As the poster tagline promised, the film put a big smile on my face; surely Happy-Go-Lucky is one of the most appropriately titled movies ever.

Happy-Go-Lucky is now available on DVD. The movie is rated R, apparently only for language, and that’s mostly pretty tame. There’s really no objectionable sexual or violent content.

One thought on “The Movie Date: Happy-Go-Lucky”