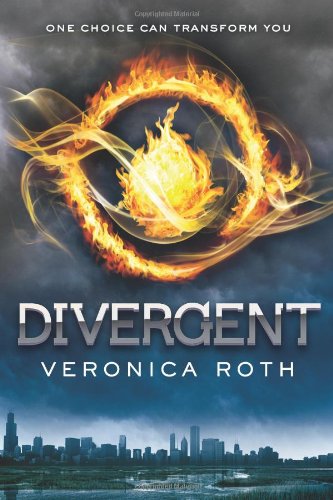 Published by: Katherine Tegen Books, May 3 2011

Divergent kicks off a new dystopian trilogy by debut author Veronica Roth. Bookstore shelves are bursting with dystopian books that are all trying to be the next Hunger Games. Divergent comes the closest yet to capturing the pulse pounding excitement of THG. The fast paced and suspenseful Divergent is the real deal.

Sixteen-year-old Beatrice lives in dystopian Chicago where society is divided up into five factions that best represents their character. The five factions are Abnegation (selflessness), Candor (honesty), Amity (peaceful), Dauntless (bravery), and Erudite (intelligence). Every year sixteen-year-olds are evaluated to identify the faction that they are best suited for. Following the evaluation, a ceremony is held where the teens formally choose the faction that will define their lives. Beatrice’s evaluation is inconclusive, so she has a tougher time making her choice. Once she decides, the initiation phase begins. She must compete against other initiates in grueling combat and mental exercises to fight for a spot in her chosen faction. Beatrice (now called Tris) enters into the competition of her life, where it is unclear who she can trust. She’s got secrets of her own to keep including a love interest in this high stakes tournament.

If you like books jam packed with action, this one’s for you. The suspense is relentless with danger around every corner. The majority of the book takes place in the initiation phase. This is a series of highly competitive battles where the initiates are scored and ranked accordingly. The faction leaders demand the best and have eyes everywhere. Betrayal, backstabbing and cruelty are the name of the game. Meanwhile, outside the initiations there is a political power struggle brewing between the factions that threaten the status quo.

Tris is a refreshing and complex heroine who evolves throughout the novel. She faces challenge after challenge with surprising results. She’s smart, and tough as nails, and has something to prove. Overall she’s a badass character who is fun to watch. Her love interest is also tough, smart and mysterious. He is not looking to change her, and is attracted to her strength and power.

There is never a dull moment in this book, and I could not put it down. Divergent is paced well, and has good world building and food for thought. I liked the Chicago setting, and the descriptive writing and details helped me to visualize the scenes well. I definitely imagined it as a movie while I was reading it, and in fact Summit has bought the film rights. The ending is a little abrupt, but was satisfying overall. This book is a chilling and heart pounding suspense thriller that had me on the edge of my seat. I can’t wait to read the sequel, which should be out in 2012. Hunger Games fans; this is the book for you.

Read the first 100 pages of Divergent

Take the Faction quiz on the Divergent FB page (I got Candor, how about you?)

10 thoughts on “Divergent by Veronica Roth”