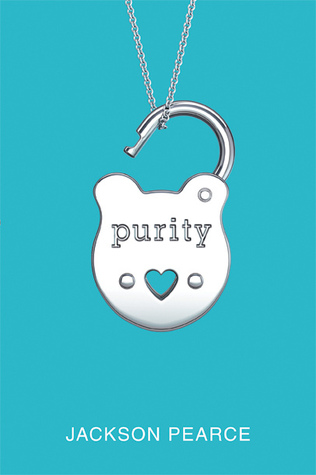 The topic of religion is not something I usually seek out in my escapist reading. But the whole purity vow idea got my attention and it looked like kind of a humorous read. The story is not as light-hearted as I thought it would be, though I did identify with it on some levels, and found it to be a touching read overall. Religion and sex are two of the hot-button topics in Purity as you might imagine, and some of it is a little far-fetched, but I enjoyed it all the same.

In Purity, Shelby loses her mom to cancer and makes three final promises to her: to listen to her father, to love as much as possible, and to live without restraint. Shelby is around ten at the time and she takes these promises very seriously and very literally. Now it’s six years later and Shelby is focusing very hard on promises one and three. She does not disobey her father, but in the process they don’t have the best father-daughter relationship. And to fulfill promise number 3, she has a list of about 400 items on her Life List to achieve.

Things get complicated when Shelby’s father wants her to participate in the Princess Ball, a father-daughter event where she is to make a ceremonial vow to live a pure life – no underage drinking, drugs or sex before marriage. She’s not sure if she agrees with this vow and decides that losing her virginity before taking the vow will keep promise number one intact.  In taking this big step she learns a lot about herself, her father, and her mother’s actual intentions along the way.

The issue of grief plays a large role in the book. I know it seems a little immature of Shelby to take her mother’s final requests so literally and so far. But as someone who has also lost her mom I could understand Shelby’s need to honor her mother’s wishes and have something to grasp onto. A lot of Shelby’s questions about religion also rang true to me as someone who’s been through that loss and questioned the whys. Kudos to Pearce for handling grief in such an insightful way.

The sexuality aspect is where it lost me a bit. I couldn’t buy into the reasons for Shelby’s plans, and I just wished she and her father could communicate better so that she could voice her concerns about the vow. Both Shelby and her dad are trying so hard to pull it together for each other but they overlooked just having basic communication. I did like each small step they took along the way to improve their relationship though. I liked also how Shelby’s perception of sexuality and the preconceived notions about those around her evolved over the course of the book as well.

Friendship is another theme of the book. Shelby’s friends Ruby and Jonas are her fun, supportive partners in crime and added a good element to the story.

At just over 200 pages, Purity is a quick read but it holds a lot of story in its slim volume. I think Jackson Pearce’s contemporary debut is quite successful and I hope she writes more books like this. If the topic of sexuality and religion doesn’t scare you off, give this book a try. I was pleasantly surprised and moved.