Book Title: Across the Universe 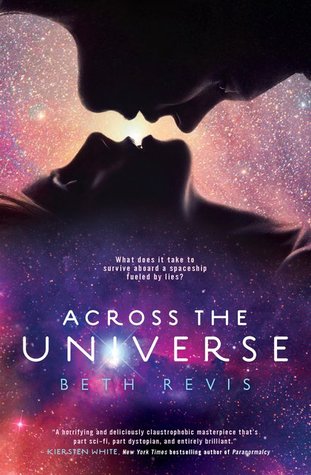 Across the Universe is a well-written, creative and exciting science fiction novel by debut author Beth Revis. The author has created a unique world that takes place in the future on a spaceship known as Godspeed. This is a unique, tense mystery thriller that you won’t be able to put down.

Seventeen-year-old Amy has been frozen, along with her parents, and placed in cargo on Godspeed to be opened 300 years in the future when Godspeed arrives on a new planet.  However, Amy is mistakenly awakened on the spaceship fifty years too early. Now she must adjust to life on Godspeed, and follow the spaceship inhabitant’s customs and rules, without having her parents around as support. Amy finds out that her awakening may have not been an accident, and someone may be maliciously releasing the frozen cargo. Amy must solve this mystery to save her parents’ lives.

Eldest and his successor Elder lead Godspeed. Elder is one of the only inhabitants on Godspeed that is Amy’s age, and he is drawn to her immediately.  Elder has been taught to follow in Eldest’s footsteps without question, but Amy is opening his eyes to new ideas.

Both Amy and Elder narrate this book in alternating chapters. This works to present the point of view of Amy as the newcomer, and Elder who has only known life on Godspeed. We are able to see how they react to their appearance and behavior, and it helps to keep the pace moving. Amy and Elder are well-defined characters to root for. Amy behaves appropriately for someone who has had her life turned upside down. Elder is kind and thoughtful and trying to find his way as a leader. Harley, Elder’s friend, is another standout character to look out for in the novel because of his refreshing personality.

Life on the ship can be pretty dark and scary, and secrets lurk at every corner. I enjoyed trying to solve the ship’s mysteries, and wondering whom to trust.

Sci-fi fans will appreciate the painstaking level of detail used to describe the spaceship Godspeed and all it’s bells and whistles. Godspeed is a vast spaceship with all the hi-tech objects and machinery that you would expect to find in the future. However, this book should appeal to anyone who enjoys dystopian, fantasy, or contemporary fiction. The sci-fi elements are presented in a clear and understanding way that should capture anyone’s interest.

Across the Universe contains some food for thought with the themes and ideas presented. The ending is exciting and and filled with surprises. And, although the ending of the book is satisfying in itself, I look forward to reading the sequel. Beth Revis is one to watch.

6 thoughts on “Across the Universe by Beth Revis”