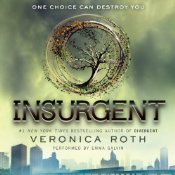 Insurgent has been on the top of my most anticipated sequels list for a while now and finally it’s out! I think I own the first book Divergent in every format available, and even though I’ve read it and listened to the audiobook more than once I still could have used a refresher for the sequel. Because I really enjoyed the audiobook narrator for Divergent, I decided to listen to the sequel in audio as well. Emma Galvin just becomes Tris with her narration and happily she’s back for a repeat performance.  I thought listening to the audio would help me slow down the pace of reading the book so I could savor it more.  But of course I finished this 11-hour audiobook in quick order. If it’s possible Insurgent is even more intense than the first book, and left me feeling the need to read it all again.

First, here’s a little background on the series. The Divergent series takes place in an enclosed future Chicago society divided into five factions by personality type. Aptitude tests administered to sixteen-year-olds determine the faction they are best suited for. The main character, Tris, grew up in Abnegation, the selfless faction, but has the opportunity to choose another faction, and start a new life she’s better suited for.  Her choice has big consequences that can change the face of society. She soon connects with Tobias, someone she has a lot in common with. Divergent ends with a lot of turmoil, and Tris has to pick up the pieces of her life in Insurgent.

Insurgent begins right where Divergent left off and the action quickly picks up. Now that they are on their own, Tris and Tobias are on a tour of all of the factions to plot their next move. I’ve been so curious about all the factions and it’s interesting to see how they line up with my expectations. With each faction visit we learn a little more about Tris, Tobias and their other crew, through simulations and other character interactions. Tris is dealing with her past actions and suffers with PTSD but she doesn’t have much time to dwell – there’s too much at stake.

The intensity and relentless heart-wrenching drama reminded me of how I felt reading Mockingjay. The pace doesn’t let up and there are betrayals, surprises and game changing reveals on this journey.  There were times I missed the more focused feel of Divergent and felt a little lost amid the fast moving Insurgent. There are so many new characters introduced it is hard to keep them straight and whose sibling they are or what faction they belong to. I recommend re-reading Divergent first or having the author’s cheat sheet handy to refer to, as I did several times.

I would be remiss if I didn’t mention the relationship drama in the book. Things are a little bumpy for Tris and Tobias, but kudos to Veronica Roth for not resorting to love triangles to add conflict. All of the chaos around them and tough choices tests their bond in interesting ways.

One thing that helped me keep the story straight and “read” it at a reasonable pace is by listening to the audiobook. Emma Galvin nails the tone of the book and most importantly the voice of Tris. She reads with the appropriate intensity and in fact makes the book even more exciting. She makes all of the character voices distinct, both male and female and varying ages, but the voices are not overdone or distracting. The audiobook enhances the book and provides an incredible listening experience. The only downside to listening is that it’s harder to go back and refer to different chapters if you need to, but otherwise give this audio a try.

I think I enjoyed Divergent a little more than the sequel, but still found a lot to enjoy about Insurgent. I like that it’s thought provoking and surprising and keeps opening up new doors to explore. There is character development and the plot is never boring. I can’t wait to see how the series develops with the final chapter.  The final book is due out next year, and all we know so far is that it won’t be called Detergent.

Here’s the final word on why you should read Insurgent from my YA daughter. “Read it because it is the sequel to Divergent, it has Tobias in it, and it’s really good.”

Check out the Insurgent book trailer: