Christmas came early and brought a new book in the Bloodlines series! It seems like I’ve been waiting for this one for ages, but it’s only been nine months since The Indigo Spell. It’s great to get back to Palm Springs to see what this motley gang of Vampires, Alchemists, and Witches are up to. And this is the first book in the series where we get dual pov with Adrian and Sydney. I listened to The Fiery Heart audiobook, which features two narrators as well. This installment got my heart all aflutter and displays Richelle Mead’s trademark romance, angst, and humor. 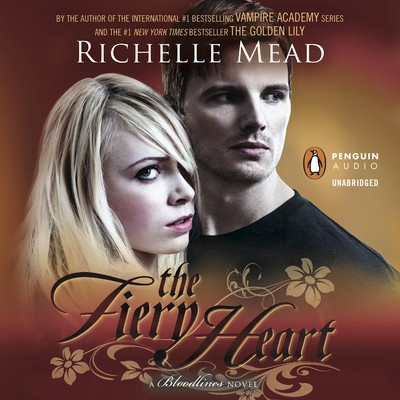 In THE INDIGO SPELL, Sydney was torn between the alchemist way of life and what her heart and gut were telling her to do. And in one breathtaking moment that Richelle Mead fans will never forget, she made a decision that shocked even her….

But the struggle isn’t over for Sydney. As she navigates the aftermath of her life-changing decision, she still finds herself pulled in too many directions at once. Her sister Zoe has arrived, and while Sydney longs to grow closer to her, there’s still so much she must keep secret. Working with Marcus has changed the way she views the Alchemists, and Sydney must tread a careful path as she harnesses her profound magical ability to undermine the way of life she was raised to defend. Consumed by passion and vengeance, Sydney struggles to keep her secret life under wraps as the threat of exposure – and re-education – looms larger than ever.

Pulses will race throughout this thrilling fourth installment in the New York Times best-selling Bloodlines series, where no secret is safe.

I have come to love this series as much as Vampire Academy and the latest book delivers. It hit on all the points I wanted- character development, Sydrian time, less high school drama, quirky character appearances, VA cameos and action. Zoe is a thorn in my side as I’d feared, but on the plus side Jill is much less annoying in this one and I daresay I’m curious about what happens next for her.

With The Indigo Spell came a turning point in Adrian and Sydney’s relationship, and in The Fiery Heart we get a front row seat into their clandestine affair. This opposites attract relationships is one of my favorites in YA, and I love how together they bring out their best qualities.

Adrian has grown a lot since his Royal Court playboy days, but it will take time for his old friends to see him with Sydney-colored glasses. Having someone like Sydney hold him in such high esteem makes him strive to be the best for her and he takes some big steps forward. His spirit-using ability is a blessing and a curse, as it takes a toll on his emotions, and part of his personal growth is how he manages spirits side effects. But when times are tough he still can’t help his charming sense of humor (Adrian saying Hopper could be Bar Hopper made me lol- read it and you’ll see.)

Sydney has been playing in dangerous territory for a while, as she’s dabbling in witchcraft, talking to rogue alchemists, and of course dating a Moroi. I was on edge the whole book waiting for the other shoe to drop. She is a different woman than she was when we first met her with Rose, and her strength, loyalty to her friends, and her moral compass are some of her most endearing qualities.

Wendy mentions in her review the blood-tasting tease. That is not something I expected to see in this series, but after reading this book, I am fully on board with this development. Besides the (surprising) vampiric behavior, I’m also a fan of the Sydrian “love phone!” Every hot, forbidden Moroi/Alchemist couple should have one.

I listened to the audiobook, read by Emily Shaffer and Alden Ford. After also listening to The Indigo Spell, Shaffer has become Sydney to me, and I’m totally comfortable with her narration. She captures Sydney’s strong and capable everyday manner, and her softer side with Adrian. I like her reading of the side characters like Angeline, Malachi Wolfe, and Abe as well. Alden Ford delivers a very Adrian-worthy performance as the Moroi spirit user. It is really wonderful to have a male narrator read Adrian’s voice and some of the other male characters, and I hope the books continue in dual pov. Ford “gets” Adrian and reads with his cocky, distinctly Adrian manner. Mead’s writing of Adrian and Sydney is very distinct as they are two very different personalities, so I don’t think you’ll have any trouble distinguishing their voice in the printed book, but the audiobook is a real treat. I was sorry to see it end.

As I was about 80% into the book and things got very exciting, I started looking for the release date for the next Bloodlines series book. (I shouldn’t read these so fast!) I’m eager to see how the latest wrinkles iron out in book five, Silver Shadows, due out next Summer. Meanwhile, The Fiery Heart is on sale tomorrow, and we can always reread all the VA and Bloodlines books while we wait for the next book.

8 thoughts on “The Fiery Heart by Richelle Mead Audiobook Review”