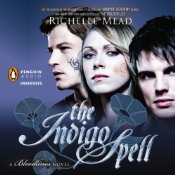 The Indigo Spell audiobook left me feeling all happy and excited. I’ve read a lot of Richelle Mead’s books and it can be a nerve-wracking experience seeing what she puts her characters through. So I braced myself going into this one for a bumpy ride. And don’t get me wrong; there is change in the air in this third installment, with hints at trouble ahead. But there are also light-hearted moments; daring acts of bravery, and a surprising level of hotness in this one that made it really fun. And the ending left me with a smile that makes it hard to move on to another book.

In the third installment of the Bloodlines series, Sydney’s life is at a crossroads. She’s always gone down the straight and narrow path, but now she’s become more questioning of her role as an alchemist. Marcus Finch, the alchemist runaway, gives her another point of view to consider, but is he someone she can trust? Magic also plays an important role for Sydney in matters of life and death. And in the romance department there’s that taboo attraction between her and Adrian to address.

Sydney has become a very endearing character to me. She’s such a different heroine than VA’s Rose, but kick-ass in her own right. I like this new side of her that we meet in The Indigo Spell and seeing her growth as a character overall. Adrian is also rising to the challenge and fast becoming the leading man we always knew he was. Red-hot chemistry between them I tell you!

Richelle Mead sure knows how to weave a story. With such a big cast of characters there is always some drama going on but none of it felt like filler to me. The different plot twists for the Palm Springs crew provide additional insight as well as some comic relief. Mead sets the stage for future story lines and gave me plenty to fret about until the next installment. I just want this Indigo Spell high to last a little while and not think about any consequences yet though.

Other things that are awesome about this book include: cameos from friends old and new, good advice from unlikely sources, arts and crafts with Adrian, magical surprises, nicknames, and dessert.

This is the first time I’ve listened to an audiobook of any of Mead’s books. I have the hardcover on pre-order and am still planning to read that format, but I couldn’t pass up the opportunity to listen in a little early. Emily Shaffer reads this audiobook and all of the Bloodlines books so far, as well as the last 3 VA books. One thing that’s difficult about listening to an audiobook of a series you know very well in print is that the character voices don’t always line-up with the way you expect them to sound. So at first I was caught off-guard with Sydney’s voice because I had a very different idea of her speaking voice. And is it mentioned in the books that Adrian has a British accent? His accent took me by surprise anyway, and was one of the most distracting parts of the narration for me.

Shaffer reads with intensity and gives it her all with distinct voices for each character. Some of the narration choices took me out of the story at times. But, by about a quarter into the book I got more involved with the plot and the narration didn’t bother me as much. Not sure if Shaffer is the best fit for this series, though since I love the story so much I’m not opposed to giving her another shot with the next book.

Speaking of the next book – how lucky are we that we get TWO Bloodlines books in one year? The next book The Fiery Heart is due out in the fall, and it’s dual POV with Sydney and Adrian. I think this series is really hitting its stride and I can’t wait to see where Mead takes it next. I’m so looking forward to discussing The Indigo Spell more with you, so pick it up on Tuesday and read fast!

4 thoughts on “The Indigo Spell by Richelle Mead Audiobook Review”