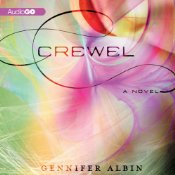 I like the cool concept of Crewel, a dystopia where Spinsters weave time with matter.  As someone who is starting to get bored with dystopia, I appreciated Gennifer Albin’s creative spin (so to speak) on the genre.   In Crewel, Adelice lives in the land of Arras, and has a gift for weaving but hides it from the Guild so she can stay with her family.  She slips up and lets her talent show and now the Guild has her in their grasp. The story felt fresh to me, and even though I felt pieces of the puzzle were missing at times, I was enthralled.

One of the most interesting parts of Crewel to me is the role of the Spinsters. In Crewel, Albin turns the word Spinster on its head. The women spin for their occupation in the book, so technically they are spinsters, but I think more often spinster is used as a negative term for someone who doesn’t marry.  And I like that the spinsters in Crewel are talented and highly regarded, and forbidden to marry in fact.  Gender politics comes up in the book, as it’s wondered why men hold all the government positions, and why don’t they share the work as spinsters.

Spinsters power the world with their loom, and can “rip” people out of society, or reweave to alter memories. Disturbing stuff! When they are not spinning, they are expected to attend lavish parties and dress up and socialize. But, they must always adhere to the purity standards set by the Guild, so that their work as spinsters doesn’t suffer.

Adelice is sassy and questioning of the Guild, and butts heads with several characters in the book. I wasn’t crazy about the love triangle (yes) in the book, and don’t really have a preference over either guy. In a way, I felt the love triangle cheapened the story a bit, and it felt unnecessary. The other relationships and other aspects of the story were more interesting to me.

Amanda Dolan reads the audiobook and she does a good job with the material. She reads with a steady pace and tries to make the story come alive by using different voices and accents. Her voices of both genders are realistic and not overdone. She puts a lot of personality into the reading and kept it interesting to me even when the world building went over my head at times. The nine-hour audiobook flew by and I finished it over a weekend.

Crewel is the first book in the Crewel World trilogy. The world building was a little confusing for me, but I know the middle book in trilogies usually answers a lot of outstanding questions. The ending does set up some interesting stories for the sequel and I’m curious to see where it goes.

You can listen to a sample of the Crewel audiobook at AudioGO.

The Wedding Gift by Marlen Suyapa Bodden Spotlight and Giveaway

Audiobook Review: The Boy in the Black Suit by Jason Reynolds
Book Review and Giveaway: Dark Parties by Sara Grant
Comic Con Preview Night – All the books
The Movie Date: How I Live Now