I’m so pleased to be the next spot on THE FIVE STAGES OF ANDREW BRAWLEY blog tour! This book is about Andrew, a boy who lives in a hospital after he loses his family. He works in the hospital cafeteria, makes friends with the nurses and tries to keep Death away from his favorite patients. He even falls for a patient, a boy who was burned in a hate crime. Andrew deals with grief and survivor guilt by drawing comics. (You can see the drawings in the book!) This book has a lot of emotion and heart and is a haunting, unputdownable read.

Read on to find out more about the book and the author, and make sure to enter the giveaway to enter some great prizes! 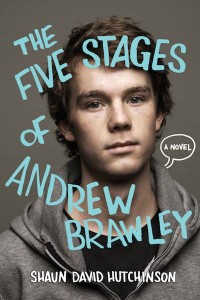 A heartbreaking yet uplifting story of grief about a boy who has lost everything, but finds new hope drawing in the shadows of a hospital. Features a thirty-two-page graphic novel.

Andrew Brawley was supposed to die that night, just like the rest of his family.

Now he lives in the hospital, serving food in the cafeteria, hanging out with the nurses, sleeping in a forgotten supply closet. Drew blends in to near invisibility, hiding from his past, his guilt, and those who are trying to find him. His only solace is in the world of the superhero he’s created—Patient F.

Then, one night, Rusty is wheeled into the ER, half his body burned by hateful classmates. Rusty’s agony calls out to Drew like a beacon, pulling them both together though all their pain and grief. In Rusty, Drew sees hope, happiness, and a future for both of them. A future outside of the hospital, and away from their pasts.

But to save Rusty, Drew will have to confront Death, and life will have to get worse before it gets better. And by telling the truth about who he really is, Drew risks destroying any chance future.

This book has been on my radar for a while, and it’s my first read from author Shaun David Hutchinson (fml, The Deathday Letter.)  I just thought it was such an interesting concept to have a hospital setting. It makes sense that this boy would want to stay at the last place his family was alive. I’m doing a Grey’s Anatomy re-watch right now so I’m watching and reading about hospitals, and what TV show this book really reminded me of was Red Band Society (RIP).

The mystery of why Andrew (Drew) is in the hospital, and what happened to his family is teased throughout the book. I really liked how Drew found a new family of sorts inside the hospital, and they were all pretty great. It was hard to believe that Drew could hide there for so long when people were looking for him, but the hospital did make for a creative backdrop for the story.

I really liked Drew’s friendship with Trevor and Lexi. Both are fighting cancer and Drew plays matchmaker with them. Also, Drew’s relationship with Rusty is sweet and heartwarming.

The story-within-a-story is the violent “Patient F” comic that Drew creates. Drew is never without his sketchbook and he even has some fans eagerly awaiting the next installment of Patient F. Illustrator Christine Larsen draws the graphic novel, and the comic pages are inserted between the chapters. I thought the comic element was a cool addition to the story and I may have to go back and just read the comic straight through.

The Five Stages of Andrew Brawley definitely has darkness and sadness, but overall it has a hopeful tone. I really dug this one and can’t wait to read more from this author. 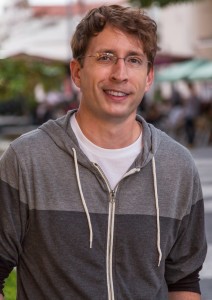 I’m Shaun David Hutchinson, you can call me Shaun. Or Hutch. I’ll respond to anything. I’m the author of books for young adults, the first of which was The Deathday Letter, and the most recent of which are The Five Stages of Andrew Brawley (out 1/20/2015) and the anthology Violent Ends (Fall 2015).

I was born in West Palm Beach, FL, and grew up in Jupiter, FL where I’ve lived most of my life save for a couple of adventures in Atlanta and Rhode Island. I always knew I wanted to be a writer but it took me a long time to figure out I could be one. I’ve been a database developer, managed a wine company, slung coffee at Starbucks, and once spent a creepy month working in a statuary. Luckily, that was before I’d seen the Weeping Angels on Doctor Who. I studied literature in college where I fell in love with Beowulf and Chaucer and gothic literature. I also studied emergency medicine at one time and insurance at another. Currently, I work in IT and fill my remaining hours with freelance web design, database design, and editing.