Foreplay is the first book in the New Adult series, The Ivy Chronicles, by Sophie Jordan. This series is about a group of college friends and their romantic adventures. I’ve heard good things about this book, even from bloggers that aren’t New Adult fans generally. After listening to the audiobook I’m happy to say I wasn’t led astray. The plot follows a familiar NA pattern, but the writing makes it distinct, and I found Foreplay to be a fun, fast listen. 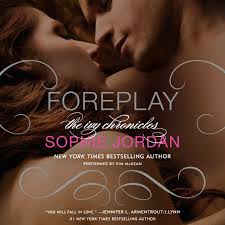 The lowdown on Foreplay:

What’s it about? Foreplay follows a college girl named Pepper, who has spent many years pining for her best friends brother, Hunter. Now that he’s finally available, it’s time to make her move. The thing is though that Pepper doesn’t have a lot of experience, so her friends want to help her learn the ropes from a guy who knows his way around before she makes a play for Hunter. She thinks she’s found the perfect candidate in local bartender Reece, but their chemistry might be a little too strong. Can they keep their feelings out of their foreplay lessons?

Pepper – Our heroine Pepper is the bookish type. Her parents are out of the picture, and she grew up with her grandmother. She works babysitting jobs to pay for school, and between that and studying there’s not much time for a social life. She’s envied her friends’ stable home environment and that’s partly why she’s interested in her friends’ brother Hunter. Pepper is socially awkward; she stammers and blushes. Her friends are helping her get out of her shell, and Reece’s attention also helps her gain confidence.

Reece – Our love interest Reece is a hot bartender at the local college hangout, though his manwhore reputation doesn’t seem to lineup with the hard-working, considerate guy Pepper has come to know. He’s direct and passionate, and goes after what he wants. Reece has skeletons in his closet though, just like Pepper, and she doesn’t want that. She wants stability to balance out her own family drama. On paper, Reece is not the guy Pepper wants to fall for, but why does she keep going back to the bar?

The Writing – Sophie Jordan writes YA paranormal (Firelight series and Uninvited) and Romance (Forgotten Princesses, The Derrings) but this is my first experience with her books. I found this story very readable, I could understand the characters motivations, and the romantic chemistry sizzles. She takes familiar tropes like the virgin and the experienced guy – something we’ve seen a lot in New Adult –and somehow makes it feel fresh. It’s refreshing also that this book is not in dual POV, and it makes Reece that much more mysterious. Jordan plants the seed for future books by letting us get to know Pepper’s friends, and hinting at the troubles in their lives.

The Audiobook – Kim McKean performs this audiobook, and this is my first experience with her narration. We got off to a rocky start because I thought her pace was a little slow for my taste, and the phrasing was inconsistent. However, McKean got into a groove and the narration did not distract me as much as it went on. McKean’s voice for Pepper sounds appropriately innocent and naïve, and I quite liked her voice work for Reece and Hunter. In the end I’m glad I listened to the audiobook, because I think McKean gets the tone of the book right. She’s comfortable with the spicy scenes, and makes each character sound distinct. Check out an audio sample.

The Ivy Chronicles trilogy continues with Tease, party girl Emerson’s story on May 27th. Both the Foreplay and Tease e-books are on sale for $2.99 currently.

Read Foreplay if you like: Easy by Tammara Webber, All of Me by Christina Lee, Losing It by Cora Carmack