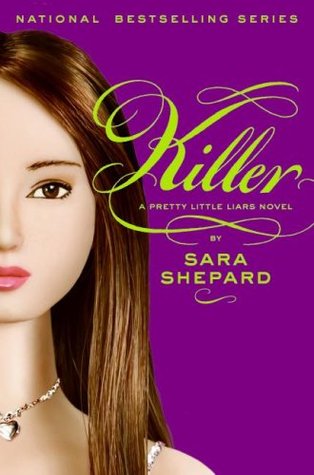 Includes Spoilers from the series so far

Hanna, Aria, Spencer, and Emily have been lying ever since they became friends with beautiful Alison DiLaurentis. Ali made them do terrible things—things they had to keep secret for years. And even though Ali was killed at the end of seventh grade, their bad-girl ways didn’t die with her.

Hanna’s on a mission to corrupt Rosewood’s youth, starting with a very attractive sophomore. Aria’s snooping into her boyfriend’s past. Spencer’s stealing—from her family. And pure little Emily’s abstaining from abstinence.

The girls should be careful, though. They thought they were safe when Ali’s killer was arrested and A’s true identity was finally revealed. But now there’s a new A in town turning up the heat. And this time Rosewood is going to burn.

My Thoughts
In Killer, the girls are still being tracked by new “A” and still following clues to find Ali’s real killer. This is a transitional book in the series. There are only two books left and we are building up to the final conclusion. In this book, the girls have their own personal dramas that they are dealing with. These are interesting stories, but the “A” plot does not progress as much as usual.

The girls have lost the trust of the police so they are on their own researching Ali’s killer. “A” is still around providing clues and causing mischief. Hanna gets a new iphone and number so “A” can not reach her. Why wouldn’t they all change their number?

Spencer suspects she was adopted and goes in search of her real mother. Spencer is not one of my favorites but I felt so bad for her in this storyline.  Emily and Isaac’s relationship is progressing, much to the outrage of Isaac’s mother. Not sure what that is about, is she a suspect? It doesn’t seem like this is going anywhere. Hanna gets a crush on an adorable younger man at school, and evil stepsister-to-be Kate continues her mind games with Hanna. Meanwhile, Aria acts on her long-time infatuation with (another) older man. The connection between Jason, Wilden, Melissa and Jenna is looking more suspicious. All of them seem to be suspects – could they have killed Ali?

The ending is a huge game-changing cliffhanger! What is going to happen next in Heartless? I can’t wait to find out.

One thought on “Killer (Pretty Little Liars #6) by Sara Shepard”