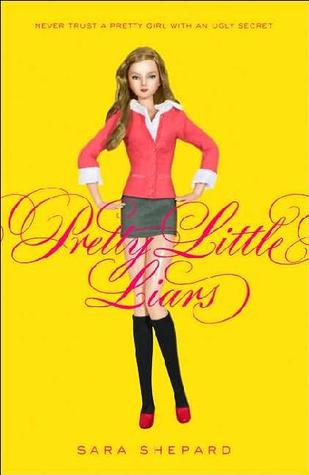 Everyone has something to hide—especially high school juniors spencer, aria, emily, and hanna.

But they’ve all kept an even bigger secret since their friend Alison vanished.

How do I know? Because I know everything about the bad girls they were, the naughty girls they are, and all the dirty secrets they’ve kept. And guess what? I’m telling.

My guilty TV viewing pleasure over the summer was the Pretty Little Liars TV series on ABC Family. I got hooked on the show and wanted to read the books to find out what happened to Ali and the identity of “A.” I thought maybe I’d even get those answers at the end of the first book. Silly me! Little did I know it would take a while to get these answers.

In this first book of the series we are introduced to Aria, Emily, Hanna and Spencer, who attend the exclusive Rosewood Day school. These high school friends were drawn together by mutual friend Alison (Ali), who has mysteriously vanished. All of them have secrets that only Alison knew about. Now they are being blackmailed via text by someone calling themselves “A.”

The four girls are all flawed, but likeable. Aria is the free-spirit, Hanna is obsessed with being popular and thin, Emily is the competitive swimmer who was fiercely protective of Ali, and Spencer is the perfectionist living in the shadow of her older sister.

Through flashbacks we learn more about the girls and their relationship with Alison. There are many potential suspects that will keep you guessing as to their involvement in Ali’s disappearance. I was immediately drawn into the story and the mystery.

These books are as addicting as the tv series – I think I like them both equally. There are enough differences between the show and the books to keep the story fresh. You will want to read these books back to back as they all end with an exciting cliffhanger!

The next book in the series is #2 Flawless.

Something Strange and Deadly Read Along: Week One
Harper Winter 2016 Tour: This is Where the World Ends
Unbelievable (Pretty Little Liars #4) by Sara Shepard
Requiem by Lauren Oliver Book Review
Waiting On: The Distance Between Us by Kasie West