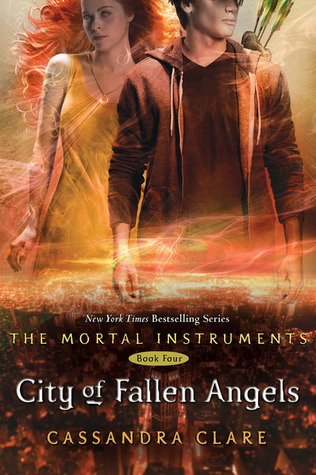 The Mortal War is over, and sixteen-year-old Clary Fray is back home in New York, excited about all the possibilities before her. She’s training to become a Shadowhunter and to use her unique power. Her mother is getting married to the love of her life. Downworlders and Shadowhunters are at peace at last. And—most importantly of all—she can finally call Jace her boyfriend.

But nothing comes without a price.

Someone is murdering Shadowhunters, provoking tensions between Downworlders and Shadowhunters that could lead to a second, bloody war. Clary’s best friend, Simon, can’t help her. His mother just found out that he’s a vampire and now he’s homeless. Everywhere he turns, someone wants him on their side—along with the power of the curse that’s wrecking his life. And they’re willing to do anything to get what they want. Not to mention that he’s dating two beautiful, dangerous girls—neither of whom knows about the other one.

When Jace begins to pull away from her without explaining why, Clary is forced to delve into the heart of a mystery whose solution reveals her worst nightmare: she herself has set in motion a terrible chain of events that could lead to her losing everything she loves. Even Jace.

Love. Blood. Betrayal. Revenge. The stakes are higher than ever in City of Fallen Angels.

The Mortal Instrument series is back for another installment of adventure and mayhem. This is the first of 3 books added to the original trilogy. It’s fun to revisit this series and find out what all of the familiar characters are up to. While I did not love this book as much as the previous 3 books in the series, it is still an enjoyable ride.

I decided to listen to the audiobook version of this book for a change. Two readers narrate the audiobook: Ed Westwick and Molly C. Quinn. Ed Westwick reads the male/Simon sections. He does a great job portraying the different characters and capturing their dialects. I was impressed with how well he handled the New York accents. Molly Quinn reads the female/Clary sections and sounds just as how I would imagine Clary to sound. The story works very well in the audiobook format and added to my enjoyment of the story.

This is the first book that Simon takes a more central role in the books. He was never a favorite character of mine, so I was surprised that I found him one of the most interesting characters in this book. He is going through vampire growing pains, love triangle drama, and finds himself in the center of vampire political drama with some newly introduced villains. He meets a new character to the series named Jordan Kyle, who may play a more important role in future books. Although Simon gets a bigger part, Jace and Clary are still very much a part of the story, along with many familiar and new characters.

All the favorite couples are back and having more angst than ever. Jace and Clary in particular continue to have a tumultuous relationship. Their angst drags down the story at times but the couple drama is understandable considering there are two more books to go. Happy to see Magnus and Alec back but even they cannot be counted on to lighten the mood. Romance is not usually center stage in this series anyway, and that trend continues with this book.

There are some new villains and mysteries introduced in this book. It definitely felt like this book sets the stage for something bigger to come. In fact, the ending opens up a whole new can of worms to worry about before the next book City of Lost Souls comes out next year.

This series is recommended for fans invested in the Mortal Instruments series. It is full of the familiar excitement and twists and turns from the previous books. The tone is a bit darker, though, and it feels like a series reboot in a way. I did not read the prequel book The Clockwork Angel first, but it may give you more insight into the story if you do. I think the audiobook format is a great way to experience this book.

Want to learn more about the series or buy the book?

Mailbox Monday (123)
Indelible by Lani Woodland: Review and Bookmark Giveaway
The Perks of Being a Wallflower By Stephen Chbosky Review and Playlist
Don’t Look Back by Jennifer L. Armentrout – On Sale Now
In My Mailbox (34)

5 thoughts on “City of Fallen Angels by Cassandra Clare”