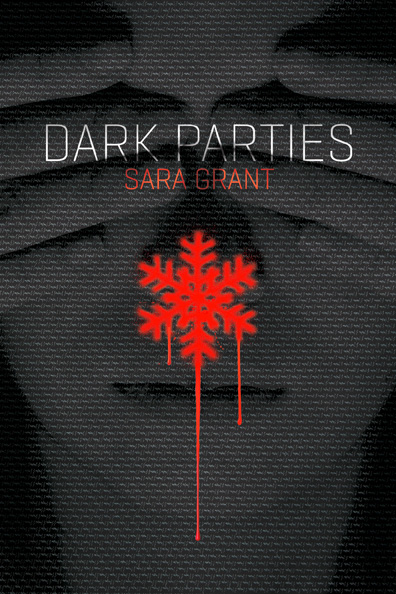 Dark Parties takes place in a dark future world where the Homeland inhabitants live inside a protective shield called a Protectosphere. The government claims this shield is necessary to protect from the uninhabitable toxin infested outside world. Sixteen-year-old Neva and her best friend Sanna are distrustful of the government and have started keeping a list of people who have disappeared under mysterious circumstances. Neva’s own grandmother vanished, and The Missing members are multiplying recently. The government is getting desperate about the dwindling population problems and is managing the news feed to maintain the illusion that things are under control. Neva and Sanna organize a “dark party” to enlist their peers to take part in a revolution.

Dark Parties is a suspenseful dystopian from debut author Sara Grant. Social injustices are stacking up with girls going missing, frequent interrogations, and citizens fitted with tracking devices by the government, and society is turning a blind eye. The protagonist Neva is someone who fights for what she believes in, even when her friends back away from the cause. She has even more at stake with her father holding a high profile government job. Neva is driven to fight for what she believes in for herself, her friends, and her beloved grandmother. Along with the rebellion, she’s also managing a complicated love life, with a boy looking for a long-term commitment and an infatuation with another unattainable boy.

The dystopian world is dark and believable. I like dystopian books like this that make me think about the future and how we may or may not go down this road. The controlling government, dwindling resource supply, fertility issues and the fight for freedom provide food for thought for today’s world. The injustices served by this manipulative government had me rooting for Neva to succeed in her rebellion.

Neva’s relationship with her family, best friend Sanna, and love interests also play a part in the book. The character relationships are not explored as fully as the dystopian elements, but provide an interesting backdrop into Neva’s world. One of the characters I was most interested to learn more about is Neva’s grandmother.

I read through this engrossing book in one sitting. The world building, strong female lead, action and surprises kept my interest level up. The book is evenly paced with a high intensity finish that had me wondering if there are plans for a sequel. Recommended for dystopian fans of books such as Matched, Birthmarked, and Delirium. Look for Dark Parties to be released on August 3.

The resistance has staged its first Dark Party. Listen in now and share with it your friends. Join the resistance!

Dark Parties Giveaway has ended! Thanks to all who participated.