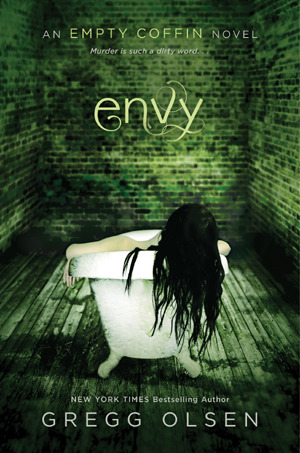 I haven’t read many crime stories, but was in the mood to try something new. I was drawn to Envy’s creepy, gorgeous cover and was hooked further when I read the premise. The combination of cyber-bullying, mystery and paranormal seemed really fresh and like it would be an interesting fall read. I was curious to see how it all tied together to a real cyber-bullying true crime, and if it would be a story I would recognize. Envy is adult true crime writer Gregg Olsen’s YA debut, and he delivers a well-woven mystery with plenty of suspense, surprises and suspects that kept me guessing throughout.

Katelyn is in a dark place in her life where everything is going wrong. When she is found dead, it seems clear to everyone that she took her own life. As the citizens of Port Gamble, Washington try to cope and make sense out of the shocking death, the telepathic twins Hayley and Taylor suspect it wasn’t a suicide at all. They begin their own investigation into Katelyn’s death and discover that everyone has something to hide.

The town is full of interesting and colorful characters and we get to know them through the multiple point of view narration. The twins are the main focus, and their paranormal ability is one of the mysteries explored as well as Katelyn’s death. In the beginning I found the teen dialogue to be a bit forced at times and some of the pop culture references a little distracting. But as the story progresses, those small issues smooth out and the writing flows nicely.

The time frame makes some leaps from past to present as more of the characters’ history and relationships to each other is revealed. The mystery kept me on the edge of my seat as I tried to put together the clues to solve the crime.

Regular readers of true-crime mysteries or those up to date on the case Envy was inspired by may be able to figure out the ending ahead of time. For me, I was surprised up till the very end. I thought the conclusion was unpredictable and enjoyed all the twists in the story.

Envy is a creepy and exciting mystery on it’s own but also makes you think about online behavior with the cyber-bullying part of the plot. It makes the story that much more scary and real when you combine the bullying aspect with the mystery.

I think this book should appeal to YA fans of dark, creepy stories, and also Adult true crime fans. Envy is a promising and well-crafted kick-off to the EMPTY COFFIN series, and I look forward to reading the next installment. The sequel is called Betrayal, and it is expected to hit shelves in Fall 2012.

The Giveaway has ended. Congrats to Karen who has won an ARC of Envy. Thanks to everyone who entered the giveaway!

6 thoughts on “Envy by Gregg Olsen: Review and Giveaway”