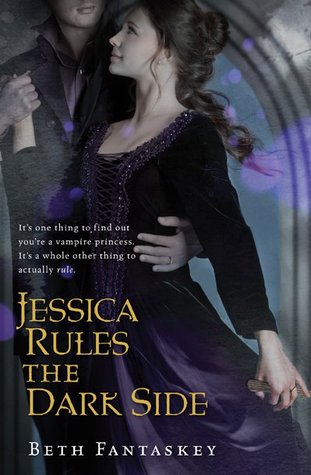 In the sequel to the hilarious Jessica’s Guide to Dating on the Dark Side, Jessica is now a princess, married to vampire prince Lucius, and living in Romania. She doesn’t quite have the hang of ruling over the kingdom, though, and relies mostly on Lucius to do the heavy lifting. When Lucius becomes the chief suspect in a murder against his archenemy, Jessica must take charge to clear Lucius’ s name before it’s too late.

I really enjoyed the first book in the Jessica series, and thought it was a fun, light-hearted vampire romance, and different from the usual vampire book.  With the wedding novella that followed, it seemed that things were left pretty well tied up with Jessica and Lucius. So it was a pleasant surprise to find another book in the Jessica series, and to see what happened after the wedding. This book takes place just a few months later, as Jessica is adjusting to her new life in Romania. Lucius and Jessica have a lot to prove before they can be king and queen, and there’s a murder mystery that casts even more doubt on the pair.

The tone of the book is very different from the first book in part because the focus is less on the romance, and more on the vampire politics. With Lucius spending the greater part of the book imprisoned, the newlyweds don’t get to spend a lot of time together. As Jess tries to figure out the murder mystery and learn to lead the kingdom, she has a couple of friends to help her. Raniero, the Buddhist / surfer / vampire cousin of Lucius, and Jess’s best friend Mindy are around to provide support. They also provide POV’s in the story along with Lucius and Jessica. Raniero and Mindy’s chapters served to provide some laughs and lighten up the story. Part of the charm in the first book is Lucius’s letters to his uncle, and we do get to see some of that again with his letters to Raniero.

The whodunit part of the story was not particularly surprising, and I thought the investigation took too long to get into gear. Jessica was really not up to the task at all for the first half of the book. I was starting to lose interest in the story at some points, though learning about Raniero’s backstory and Mindy’s own detective work and their romance made up for it a little.

I listened to the audiobook, and there are 3 different narrators who read the parts of Jessica, Mindy, and Lucius/Raniero. The narrators overall did a great job with the different accents of the characters. Jessica’s narrator was a little too dramatic for my taste, and didn’t seem to line up with how I thought the character would sound, but that may be personal preference. The chapters are very short in the book and there was a long pause in the audio between chapters that was a little distracting.

Raniero and Mindy were the breakout characters this time around, but the main character Jessica dragged down the story with her indecision. Overall, the sequel has action, character growth, and humor, but lacks some of the spark that made the first book special.

2 thoughts on “Jessica Rules the Dark Side by Beth Fantaskey: Audiobook Review”