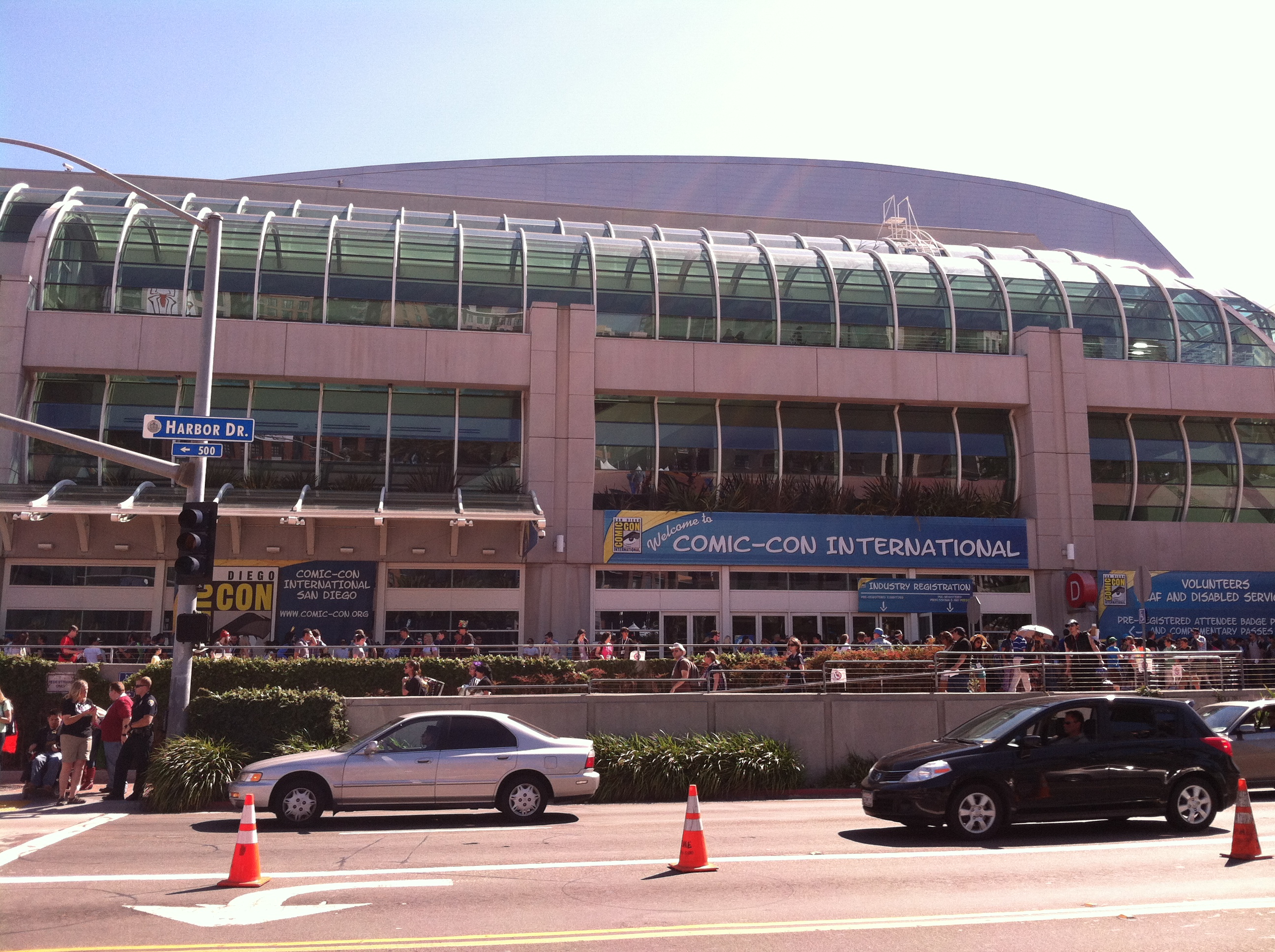 This is the first year at Comic-Con where I have not been able to do a ton of book events. In order to check out my priority panels in Hall H like Divergent and Catching Fire, I had to sacrifice a lot of book panels for the 5am lines to get into the hall. (Hall H is the largest venue at the San Diego Convention center, capacity is 6500, and there are 130k Comic-Con attendees- the odds are not in our favor!) So, that being said- I did see some fascinating book panels that I want to chat with you about including Divergent, Ender’s Game, Max Brooks/World War Z, and Catching Fire.

The first full day of Comic-Con was Thursday, and that is the day Summit Entertainment held a panel for Ender’s Game and Divergent. We got in line (Andrew saved us a spot- thanks hon!) early-ish to get a good spot in the hall for the 3:50pm panel – but honestly when the doors opened it was a walk-in. Since all the attendees were there for Ender’s Game/Divergent and it was later in the day, many folks chose to try their luck in the afternoon. We landed in the 15th row of the hall and had great visibility.

So, the Divergent movie just wrapped shooting on Tuesday July 16, two days before they arrived at Comic-Con! First, Burger and Roth talked about the premise of the book and movie to give context to the new initiates in the audience. Then- they showed the first footage ever screened from the film! I got goose bumps from the footage- they showed the train scenes, Tris being the first jumper and meeting Four, the knife throwing scene, and the ferris wheel.

Roth announced that Allegiant, the final book in the trilogy would be in both Tris and Four’s POV. On that note, there is a contest going on now where you can help choose the voice of Four for the audiobook and you could win some awesome prizes – vote here.

Looking at the footage and the cast on stage, they all look like they have great chemistry and I can’t wait to see the movie March 21! There was a hilarious moment when they were taking questions from the audience and this poor guy said he was a big fan of Ender’s Game – whoops wrong panel! He was booed but later redeemed 🙂 After the panel, I was totally jazzed about Divergent, and even started re-listening to the audiobook.

Next up was Ender’s Game, a movie I have mixed feelings about. I feel for the filmmakers and cast because it clearly sounds like they don’t share the same views on same-sex marriage as Orson Scott Card, but the whole controversy leaves a bad taste in my mouth just the same.

On the star-studded Ender’s Game panel were director Gavin Hood, producer Robert Orci, Asa Butterfield (Ender), Hailee Steinfeld (Petra), and Harrison Ford (Colonel Hyrum Graff). The director was really funny and enthusiastic and showed some footage from the film that looks pretty good. I’m not really the audience for this movie but I thought it looked OK. I stayed in this panel because I wanted to see how the director and producer responded to questions about the boycott of the film. The very first question from the audience was about OSC’s views on same-sex marriage. And I have to say the producer responded by saying all the right things- basically divorcing themselves from the author’s views. They are using all this negative publicity by turning it into a positive discussion and reinforcing the filmmaker’s views on defending LGBT rights, and preaching the book’s message of tolerance. Nicely handled, guys.

Harrison Ford was on the Ender’s Game panel- pretty cool, right? The questions directed to him from the audience were pretty silly though and asked things like what would Han Solo and Indiana Jones say to each other if they met- “Hi, How are You?” And the moderator Chris Hardwick made sure to bring the poor guy up who asked the Ender’s Game question in the Divergent panel. The Ender’s Game movie will be out November 1st.

Jumping to Friday, kind of spur of the moment Andrew and I decided to check out two back to back panels- Max Brooks: Zombie Survival and Extinction Parade Insights, and BBC America’s Orphan Black. There was a lot of interest in both of these panels and they should have been in a bigger room- but since we got in line two hours early we were able to score seats. 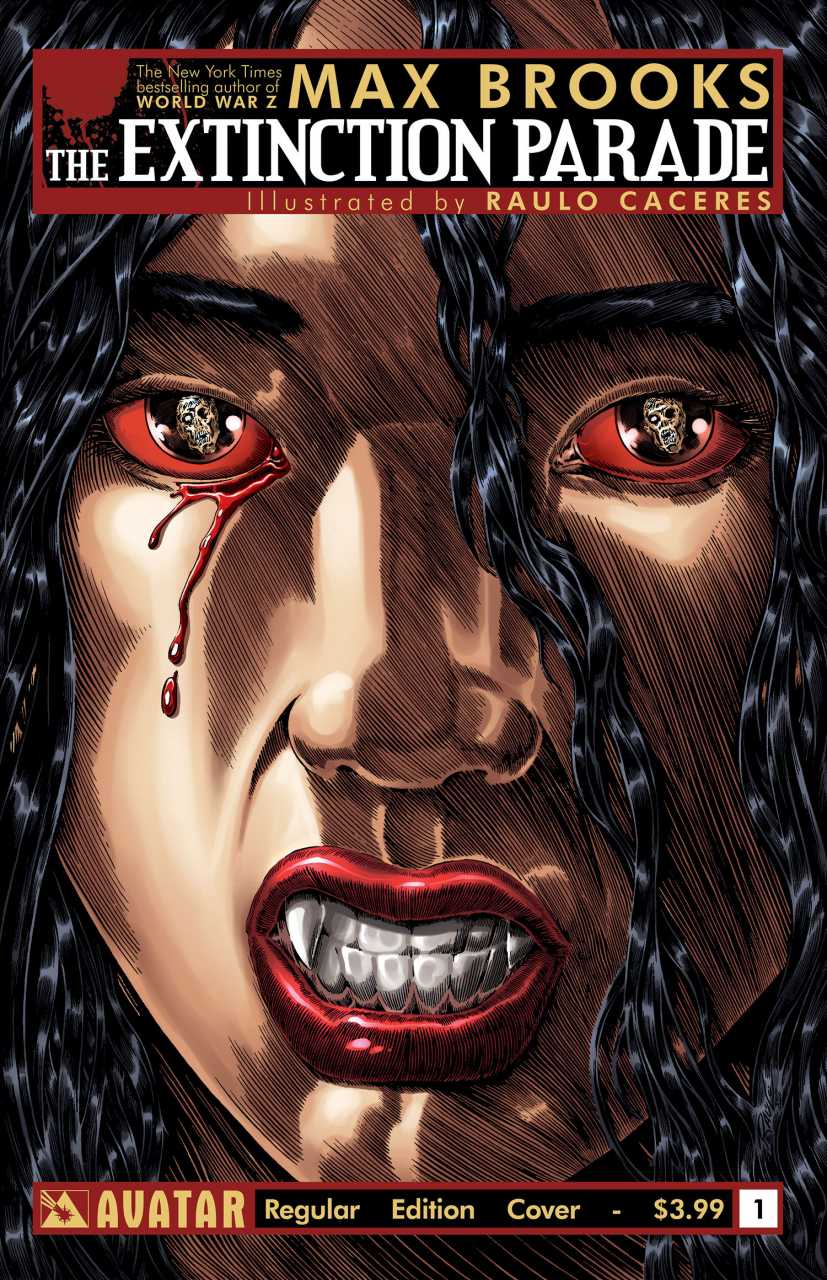 I actually stumbled into Max Brooks’ (World War Z) booth in the exhibit hall on Preview Night Wednesday. I stopped to meet him and got World War Z and the Zombie Survival Guide signed for Andrew. I overheard someone telling Brooks that they enjoyed hearing him speak recently so that made me intrigued to check out his panel.

So, basically if you have the chance to hear Max Brooks speak you should totally go. He is a super dynamic speaker and both Andrew and I were completely charmed. He started out by asking how many people in the room were there waiting for the next panel Orphan Black (Comic-Con does not clear the rooms between events so you have to plan ahead to get a good spot) and there was a lot of applause! However, I think it’s safe to say that the audience was completely won over by Brooks by the time the panel ended. 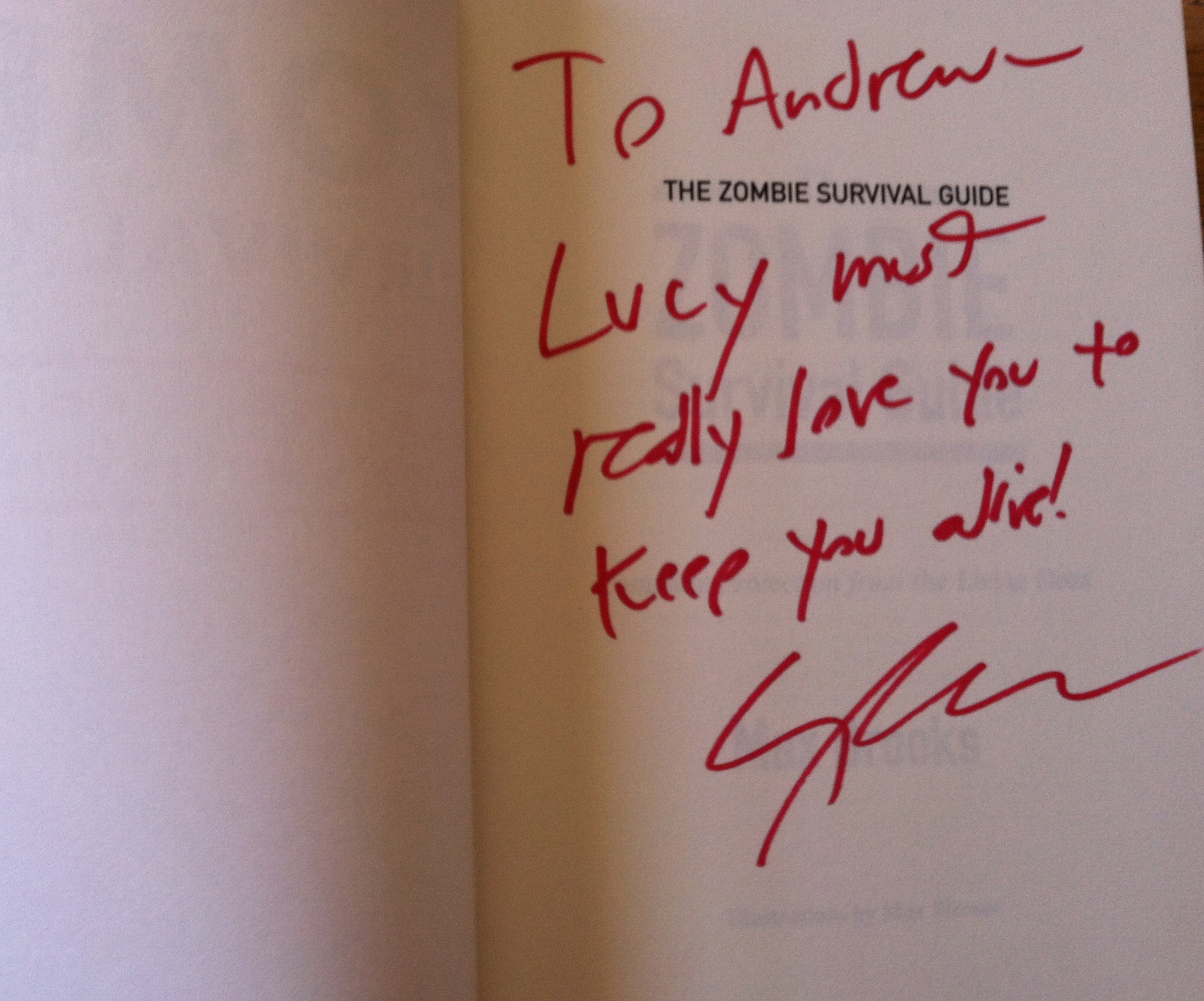 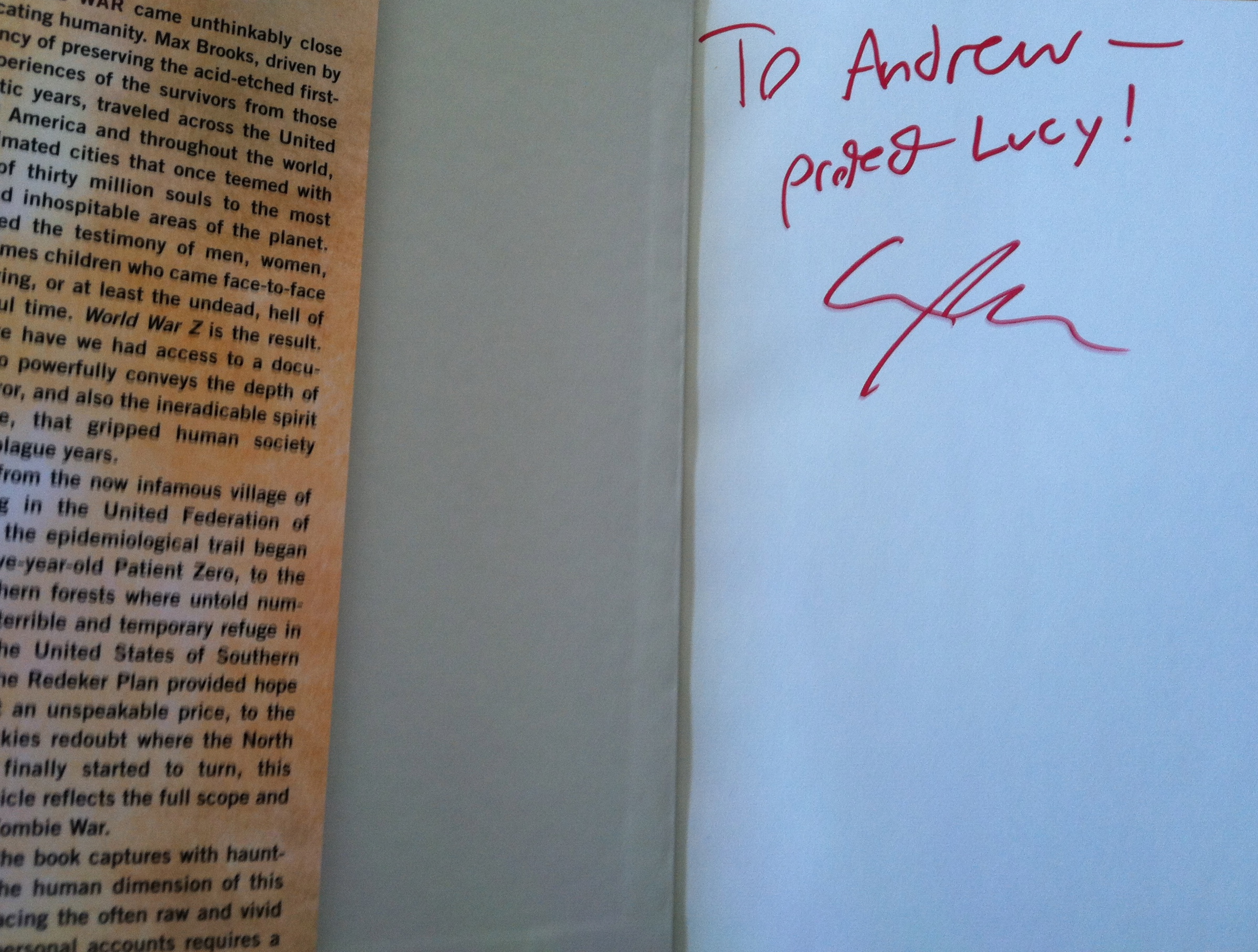 Finally, on Saturday it was time to check out the Hunger Games: Catching Fire Hall H panel- this is the first appearance of Hunger Games at Comic-Con. Lionsgate paired this panel with I, Frankenstein (To sum up the I, Frankenstein panel, I didn’t have any interest in the movie before, and I care even less now.)

Another note about Hall H- it used to be if you lined up at 6am or so the day of the panel you would get a spot in the hall- now that is cutting it too close. You have to spend the night camping out in the queue to get a seat in the front, or arrive by 4-5 am to at the latest (5 is cutting it very close). Andrew arrived at 5am to save us a spot, and luckily we got in.

Saturday was huge in Hall H and probably one of the best, most star-studded days ever at Comic-Con with Warner Bros, Marvel, and Fox all showcasing their biggest franchises. I was there primarily for Catching Fire, but quickly got swept away by the X-Men panel, Guardians of the Galaxy panel, EW’s Women Who Kick Ass panel, Joss Whedon’s surprise appearance/Avenger’s 2: Age of Ultron tease, and omg Loki representing Thor: The Dark World (see Tom Hiddleston stealing Comic-Con here.)

On the Catching Fire panel were director Francis Lawrence, Jennifer Lawrence (Katniss), Josh Hutcherson (Peeta), Liam Hemsworth (Gale), Lenny Kravitz (Cinna), Jena Malone (Johanna), Jeffrey Wright (Beetee), and Willow Shields (Prim). We were sitting way, way in the back so I didn’t even bother to take pictures but they are widely available from other sources.

It sounds like there’s going to be continuity director-wise with the remaining three films in the franchise, with Francis Lawrence signed on for the duration. He worked closely with Suzanne Collins and sounds like he has a good grasp on the film.

Jennifer Lawrence was as always entertaining, and very forthcoming with saying what’s on her mind. Apparently she and Hutcherson have a great friendship and bond on set and speak in their own language, something that was fun for the new cast members to watch. Lawrence grossed me out talking about her messy slobbery kissing scenes with Peeta. Facebook fan question: “How hot are the kissing scenes?” JL: “We should have brought the clip with the snot!” (and goes on to describe it in disgusting detail)

She also said in terms of stunts, that her greatest challenge is simply running, and trying not to hit herself with her bow.

Shout from audience: “My husband loves you!” JL: “you’re a very secure woman.”

Catching Fire will hit theaters November 22, and here’s the trailer they showed in the panel:

Sorry for the very long-winded recap! I’ll try to coax Andrew to do a Movie Date recap on the other movie panels later this week.

That’s a wrap for now!