The Movie Date is a weekly feature where we discuss movies that may appeal to YA readers. Andrew is The Reading Date’s resident movie critic and this week he discusses Deadfall, directed by Stefan Ruzowitzky. 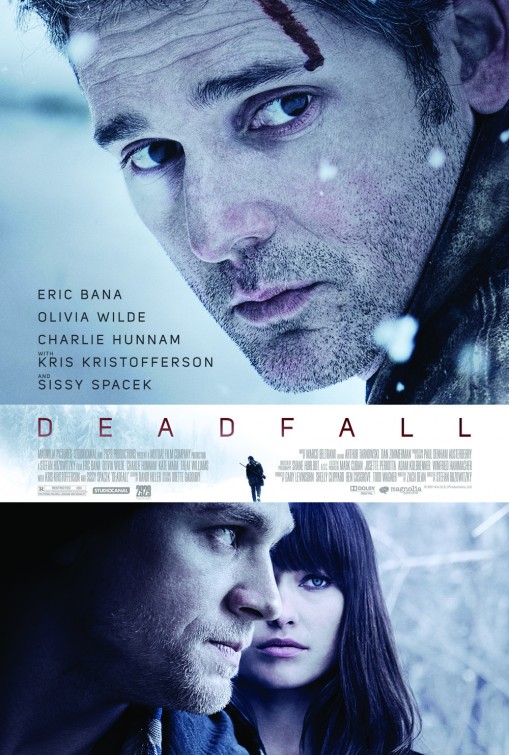 After robbing a casino before Thanksgiving, a brother and sister stranded in the snow make their way separately through a blizzard toward the Canadian border.

Since there are countless movies set during Christmas, it’s surprising that so few take place over Thanksgiving. For comedy you’ve got Planes, Trains, and Automobiles, and for family drama there’s Home for the Holidays… and that’s about it. So I was delighted to learn that the recent thriller Deadfall is set around Turkey Day. It’s far from a classic—the critics enjoyed roasting it—and the plot has more holes in it than a lace tablecloth. Still, I enjoyed this frosty “noir blanc” and thought I’d offer it up as a possible T-day side dish. Not especially bloody or cruel, it could make for good turkey-day viewing, though its love scenes might be a bit prolonged for younger viewers. (It’s on Netflix Watch Instantly, so you may be able to watch it on the holiday.)

Deadfall actually manages to touch on Thanksgiving’s major themes of loved ones, travel, feasting, and gratitude. In terms of its characters, it’s certainly a family film, since all the key players belong to of one of three clans:

Dashing through the snow, Liza and Addison are gleefully countin’ the cash when their driver hits a deer, wrecking the car and himself. After Addison shoots a passing cop, bro and sis trudge off into the icy whiteness, splitting up to avoid suspicion. Meanwhile, Jay has just beaten and injured his old boxing coach in Detroit and takes it on the lam up to Mom and Dad’s. En route, he rescues helpless, anonymous hitchhiker Liza; they hit a bar and then a motel room to share body heat, perhaps to stave off hypothermia. Addison, meanwhile, is leaving a bloody trail of mayhem en route to the Canadian border.

The third act finds Liza, Jay, and Addison all turning up at the Mills. In a wry parody of the holiday, Addison forces poor June to serve the roast goose, then at gunpoint demands that everyone stand and say what they’re grateful for. Late to the party, lady cop Hanna shows up along with her sheriff dad and just desserts are served.

Amidst the blizzards and bullets, there are frequent lapses in logic, as when Jay and Liza, still suspicious of one another, halt their escape to cheerfully build a jolly snowman. Still, I found the film quite enjoyable, thanks to the efforts of its stellar cast. Wilde gets to play both sly and sweet, and it’s pleasing to see the usually sinister and conniving Kate Mara (Transsiberian, American Horror Story) in a more earnest and innocent role. Kristofferson and Spacek class up the joint far more than it deserves. Director Stefan Ruzowitzky’s dedication to the material keeps this oft-absurd film from ever becoming comical. Whether it’s the pumpkin pie for your holiday or just a turkey is up to you.

If you missed Deadfall in theaters, you can check it out on Netflix streaming now. Deadfall is rated R and runs 94 min.

5 thoughts on “The Movie Date: Deadfall”