Spotlight is a story about honest, hardworking, unglamorous people told in an honest, hardworking, unglamorous style. The cast is a dream-team of great actors—Michael Keaton, Mark Ruffalo, Rachel McAdams, Liev Schrieber—all playing with more restraint than we’re used to, yet full of quiet intensity. (In an early scene, a hunched-over and messy Ruffalo sloppily wolfs down a slice of layer cake; “here’s a side of him we haven’t seen,” I thought.) 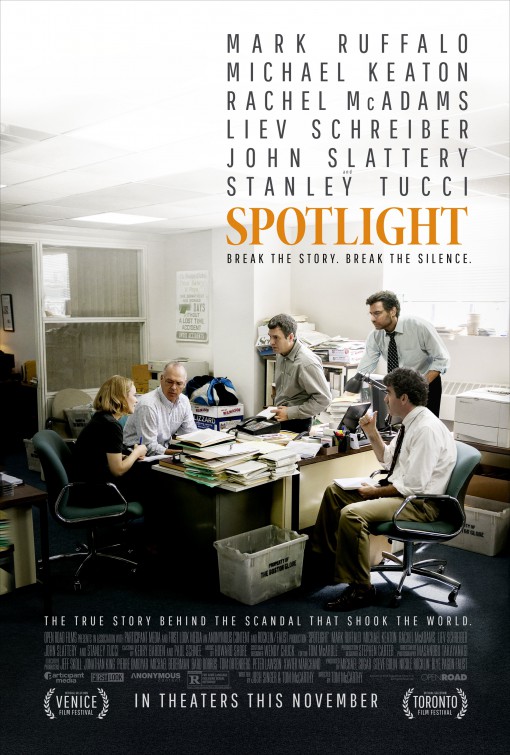 This based-on-a-true-story tale involves a team of Boston journalists in 2001 uncovering evidence of child abuse by numerous Catholic priests. The team also discovers systematic cover-ups by the local cardinal that suggest even more widespread corruption. Surprisingly, no one at the Boston Globe seems particularly interested in telling this story at first. The paper’s Spotlight investigative squad (Keaton, McAdams, Ruffalo) is assigned the piece by a newly assigned editor-in-chief (Schrieber). The team gamely digs into the evidence, and as they hear heartbreaking testimonies from abuse survivors, the fire slowly grows within each of them.

The film is absolutely riveting yet matter-of-fact. I really appreciate the respect the filmmakers showed towards the ostensible villains: the priests, cardinals, and the Church itself. No attempt is made to demonize these decent yet flawed souls; it’s very clear that the writer and director, just like the journalists they’re dramatizing, appreciate the good work done by Catholics. Yet everyone knows this is a story that simply needs to be told; innocent people are being hurt badly.

Unlike your average conspiracy thriller, there’s no attempt by the “bad guys” to threaten or dissuade the journalists, no menacing tirades or intimidating notes. (The one abusive priest we do meet is disarmingly open and honest about his crimes.) In fact, the greatest conflicts are within the newspaper’s own walls, between members of the Spotlight team and others on the editorial staff. Is the story fully vetted? Is it the right thing to do? And what about these claims that we’ve had the story for years and failed to do anything about it?

All the acting’s great but I especially enjoyed Michael Keaton, who’s all too frequently over the top (because he’s asked to be), as in last year’s Birdman. Here he’s insanely dialed in to his low-key character, free of the broad expressions and facial gestures he often resorts to. I can’t think of a better Keaton performance (though he was pretty funny in Night Shift). Spotlight is a rewarding tale of people who don’t want to destroy their enemies, only bring them to justice. It’s an unusually mature film.

2 thoughts on “The Movie Date: Spotlight”