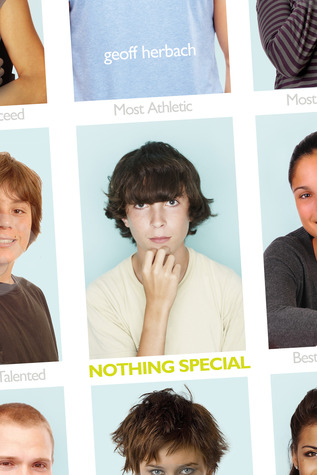 Book: Nothing Special by Geoff Herbach, Sourcebooks Fire, On Sale May 1, 2012

Book Info/Source: Book #2 of a YA trilogy, Received via NetGalley, Available in paperback 290 pages

Nothing Special by Geoff Herbach is the sequel to last year’s Stupid Fast, and centers on a teenage boy named Felton Reinstein. Even though I haven’t read Stupid Fast yet, the premise of the sequel sounded interesting enough to take a chance. In the first book Felton achieves his dreams and in the sequel things start to fall apart. Nothing Special is the second book in a trilogy, and should appeal to anyone that enjoys realistic YA and coming of age type stories.

I haven’t read too many YA books told from a male perspective, and I have to say I was totally impressed with Felton’s voice. The tone is conversational and funny, and Felton is an authentic and endearing character. There were things in the sequel that probably went over my head because I didn’t read the first book, but overall there were enough references to past events to get me caught up.

When Nothing Special begins, Felton is a star high school football player with a bright future ahead, but self-doubt is starting to kick in.  His little brother Andrew feels somewhat neglected compared to the high achieving Felton, and decides to take a bus trip alone to prove that he can make something of himself away from Felton’s shadow. Felton’s devastated and feeling guilty and tries to make things right with his brother.

The book reads like a letter or journal to his girlfriend Aleah who has moved away. Felton chronicles two timelines – events that took place over the summer and how they got him to the present day. His life has changed a lot in a short period of time, and during a series of travel delays he needs to get his thoughts on paper.

I liked that although the tone of the book is light and conversational, the story addresses heavier topics as well. Felton’s family has gone through some difficult times and is dealing with grieving and depression. Felton had a falling out with his best friend, and misses his girlfriend as well. He is also feeling the pressure of choosing the right college, and growing as an athlete. With all of this stress, he becomes self-absorbed and doesn’t notice how his relationships with his brother Andrew and friend Gus are deteriorating. Felton is not perfect but he’s someone I really rooted for.

The end brings some closure to these stories, but also leaves the door open for the final book in the trilogy. This is a great series that teen boys especially will love. On a related note, the author is actually on a mission to get teen boys interested in reading more and wrote a blog post on the subject- check it out here.

Congrats to Patricia who has won a copy of Nothing Special!