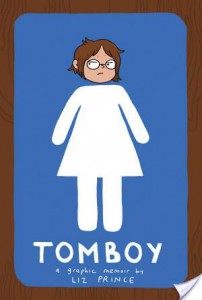 Growing up, Liz Prince wasn’t a girly girl, but she wasn’t exactly one of the guys either (as she learned when her little league baseball coach exiled her to the distant outfield). She was somewhere in between. But with the forces of middle school, high school, parents, friendship, and romance pulling her this way and that, the middle wasn’t exactly an easy place to be. Tomboy follows award-winning author and artist Liz Prince through her early years and explores—with humor, honesty, and poignancy—what it means to “be a girl.”
From staunchly refuting ”girliness” to the point of misogyny, to discovering through the punk community that your identity is whatever you make of it, Tomboy offers a sometimes hilarious, sometimes heartbreaking account of self-discovery in modern America.

I’m so pleased to talk to you about Tomboy: a graphic memoir by Liz Prince as part of Zest’s True Stories blog tour! I jumped at the chance to review Tomboy because it’s an autobiographical graphic novel, and that’s an area I want to dig into more. Also, the “gender identity” theme of the book is very topical and something I’ve wanted to see more of in YA. Tomboy is fantastic, funny, relatable and relevant and should ring true for anyone who feels like they don’t fit into society’s gender stereotypes. Or really, anyone who feels left out for whatever reason.

Tomboy takes a look at gender roles and how isolating it can feel when you don’t fit the mold. As a tomboy growing up in the 90s, Liz Prince didn’t always feel like she fit in. Liz never wanted to wear dresses, and she liked to shop in the guys section and play with boys. She was bullied by both boys and girls however, and struggled to find her place. Tomboy makes you think about gender roles and how they play into so much of our daily life.

The voice in Tomboy is generally very funny, and Liz has some great sarcastic asides. However, this is also a book about bullying and there are some heartbreaking incidents in this book. You see verbal bullying from the girls, and verbal and physical bullying from the guys. It’s a bumpy road for this tomboy trying to find acceptance.

Liz navigates through friendship, relationships, sibling and school drama throughout the book. She is romantically attracted to boys but many times gets overlooked for more “girly” girls. She wants to see others like herself represented in books or magazines but is coming up empty.

The dialogue in Tomboy is smart and funny and has a lot of personality. Yes, there is some strong language in this book, but I challenge you to find a middle schooler today that hasn’t heard these words before. This is a book written for YA’s but I think it has a lot of value for graphic novel fans and adults, and even readers interested in comics as a career.

I don’t read a lot of graphic novels but I responded favorably to the drawing style in Tomboy. I think this was the perfect form of expression for Tomboy. Now I need more autobiographical comic recs!

Check out an excerpt of Tomboy:

Giveaway! Zest Books is offering an autographed copy of Tomboy to one lucky reader. Giveaway is open to US/Canada residents age 13 and up. To enter please fill out the Rafflecopter:

Follow all the stops on the Zest Books True Stories blog tour for reviews, interviews, giveaways and more!

6 thoughts on “Tomboy by Liz Prince Review and Giveaway”