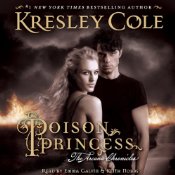 In Kresley Cole’s first YA book, Poison Princess, a sixteen-year-old cheerleader named Evie has terrifying visions. She thinks she’s losing her mind, but then the visions start coming true in the form of a worldwide catastrophe (called The Flash in the book.) In post-apocalyptic Louisiana, it’s hard to survive in a world with dwindling resources, while hiding from the scary zombie-like creatures that thirst for blood. Evie has some tricks up her sleeve though – she is a trump tarot card character come to life and with that she has some supernatural abilities. If only she knew how to use them.

Poison Princess is a dark and ambitious story that introduces a high stakes tarot card game played with flesh and blood major arcana players. The Empress, The Fool, Death, and others all play a role in this game. The story unfolds through the eyes of Evie’s character, but also features the POV of a killer named Arthur who is preying on Evie. The author plays with time as the events unfold in before-flash and after-flash fashion. The reader is kept in the dark as the danger of Arthur hovers over the book, and the reader is left to wait for his eventual face-to-face meet up with Evie. Tagging along with Evie is her classmate, aggressive Cajun bad-boy Jackson Deveaux.

I’ve never read Cole’s Immortals After Dark paranormal romance series, but I’m impressed with how she weaves a story. Poison Princess has a darker, more sinister vibe than I’ve seen in YA paranormal books. The only thing I could see toned down from a paranormal romance is milder language and tamer romantic scenes. Otherwise, the story is pretty edgy and scary for YA and I think would appeal to Cole’s IAD fans. Though the story was confusing at times, it held my attention and I finished it in short order.

Among the shortcomings for me were the characters. They were just not all that likable to me overall. Evie is trying to get her bearings and learn to control her ability and isn’t a strong enough character on her own to stand out. She does show some character growth towards the end that gives the reader a glimpse of her kick-ass heroine potential though. And Jackson is a piece of work. He is a love interest of the hot, bad-boy, jerk variety – to the extreme. You’ll either love him or hate him, and he didn’t really appeal to me. There is some redemption there with his character, but I’m not really sold on their romance. One character I’d like to see more of is the Death character, he was pretty intriguing to me.

I was thrilled to listen to the audiobook since Emma Galvin  (Divergent, Winter’s Bone) narrates it. I’m glad I listened to the audiobook, and I think listening to it made the book more exciting and brought the story to life. Galvin reads with a southern accent for Evie, and a distinctive Cajun accent for Jackson.  I think she does pretty well with the accents but I can’t vouch for how authentic they would sound to a Louisiana native, though I’m sure she did her research. Her Cajun accent reminded me of Rene from True Blood if that gives you an idea.  I prefer her usual audiobook speaking voice overall, but I applaud her choice to go for it with the accents to suit the story. Galvin does have a great ability to deliver believable voices of different genders and age groups, and her pacing and intensity level matches well with the story. There is a second narrator, but he only narrates Arthur’s character, and he narrates a very small portion of the book. Keith Nobbs does a good job with his reading of the menacing villain Arthur, so much that the character haunted me throughout the book. I do recommend listening to this audiobook for a very entertaining listening experience. Even when I wasn’t fully sure what was happening in the book I was entertained and didn’t want to stop listening.

Poison Princess is the first book in the Arcana Chronicles, and it ends on an exciting note to set up the sequel. If you like Kresley Cole’s writing I would suggest trying out her YA book – its dark and edgy and steamier than a typical YA (though probably not what IAD fans are used to!)  I’m interested to see how the characters develop in the next book.

Watch the video below to learn more about the audiobook from the narrators:

The Giveaway has ended. Congrats to Marty who has won the Poison Princess audiobook!

Audiobook Review: In Some Other World, Maybe
Dragonfly in Amber (Outlander #2) by Diana Gabaldon
Top Ten (Bookish) Goals for 2014