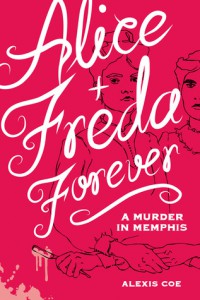 In 1892, America was obsessed with a teenage murderess, but it wasn’t her crime that shocked the nation—it was her motivation. Nineteen-year-old Alice Mitchell had planned to pass as a man in order to marry her seventeen-year-old fiancée Freda Ward, but when their love letters were discovered, they were forbidden from ever speaking again.

Freda adjusted to this fate with an ease that stunned a heartbroken Alice. Her desperation grew with each unanswered letter—and her father’s razor soon went missing. On January 25, Alice publicly slashed her ex-fiancée’s throat. Her same-sex love was deemed insane by her father that very night, and medical experts agreed: This was a dangerous and incurable perversion. As the courtroom was expanded to accommodate national interest, Alice spent months in jail—including the night that three of her fellow prisoners were lynched (an event which captured the attention of journalist and civil rights activist Ida B. Wells). After a jury of “the finest men in Memphis” declared Alice insane, she was remanded to an asylum, where she died under mysterious circumstances just a few years later.

I’m happy to chat with you about Alice + Freda Forever: A Murder in Memphis by Alexis Coe as part of Zest’s True Stories blog tour! This book is the first release for Zest Book’s new Pulp imprint – an imprint for new adults. I’ve been on a non-fiction kick lately, and I’m enjoying finding out how compelling these real life stories can be. Alice + Freda Forever just hit shelves yesterday and it’s quite original and terrific.

Alice + Freda Forever is set in 1892 and is about the real-life, tragic love story of 19-year-old Alice Mitchell and 17-year-old Freda Ward. The two had planned to wed (with Alice posing as a man) when their plans were thwarted. Their families forbid further contact, and Alice turned increasingly desperate. Their love story turned tragic when Alice murders her ex-fiancée Freda, thinking if she can’t have her no one will.

Debut author Alexis Coe, historian and columnist for The Awl and The Toast, was fascinated by the notorious case and inspired to bring this narrative history to life. The text is enhanced with Sally Klann’s illustrated maps, letters and character sketches that bring Alice + Freda’s story off the page.

Alice + Freda Forever is a real page-turner. Alice answers for her crime in dramatic courtroom proceedings that would have been the talk of twitter had that been around back then. Journalists have a field day covering this sensational case, zeroing in on the taboo same-sex relationship.

The Alice + Freda story is heartbreaking yet fascinating, and Coe’s storytelling is riveting. The social commentary on gender norms, lgbt issues, feminism, and race make the story even meatier. This is a quick, powerful read that I think will appeal to a wide variety of readers. I hadn’t heard of Alice + Freda’s story before, but I’m glad it’s out there now for more people to discover.

The whole book is quite lovely to look at, from the book jacket to the book underneath, to the illustrations. I’m not sure it would have as much appeal in e-book form, so try to pick up a copy in print.

Giveaway! Zest Books is offering an autographed copy of Alice + Freda Forever to one lucky reader. Giveaway is open to US/Canada residents age 13 and up. To enter please fill out the Rafflecopter:

Follow all the stops on the Zest Books True Stories blog tour for reviews, interviews, giveaways and more!

Snap Decision: Are you going out or staying in tonight? Giveaway
Mailbox Monday (128)
Review: Freefall by Mindi Scott
Mailbox Monday #64
The Faerie Ring by Kiki Hamilton