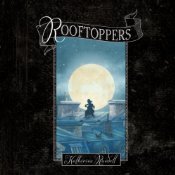 Rooftoppers is a charming middle grade book about Sophie, a plucky, determined girl in search of her mother. Rooftoppers shows readers a bird’s eye view of Paris, as Sophie travels the city of light from rooftop to rooftop on her quest.

Sophie washed up in a cello case in the English Channel after a shipwreck when she was a baby. A fellow passenger on the Queen Mary, scholar Charles Maxim, picked her up and decided to be her guardian. Together they live a life full of books, music, and delicious treats. Charles raises Sophie to be bold, brave, and inquisitive, encouraging her to forge her own path and that “you should never ignore a possible.”

The National Child Care Agency have kept a close eye on Sophie and Charles, and disapprove of her unconventional upbringing, habit of wearing trousers, writing on walls, and eating peculiarly. And now that Sophie is a young lady of 12, they feel a more “appropriate” guardian should take over. Sophie thinks her only way out is to find her long-lost mother.

Once the action shifts from London to Paris and the mother hunt kicks into high gear, Sophie comes into her own. She goes out on the rooftop and meets Matteo, who only travels by rooftop. Matteo shows Sophie how he gets by eating cooked rat and keeps warm with bird feathers. Matteo is Sophie’s secret weapon to find her mother, and he grudgingly shows her the ropes as they travel all hours of the night. And oh yes, they travel on tight ropes, and my fear of heights reached epic proportions listening to the audiobook.

Sophie is an irresistible and tenacious heroine. She’s used to being under-estimated by those around her, but now in Paris she gets to show what she’s really made of. She has no fear and is steadfast in her goal. Charles and Sophie’s relationship was just perfect, and though I loved getting to know the Rooftoppers, a little more time spent with Sophie and her guardian would have been nice too.

I listened to the audiobook, read by Nicola Barber. Barber gives the voice of Sophie a lot of spunk and personality, and Charles sounds dignified and pleasantly peculiar. With a lot of the book set in Paris, Barber reads Matteo and the Rooftopper gang with a French accent. Her voice for Matteo was spot-on and humorous- he’s kind of a know-it-all type but shows some vulnerability too. The only thing missing from the audiobook experience is that you don’t get to look at Terry Fan’s lovely illustrations.

Katherine Rundell writes a captivating and imaginative story that should appeal to middle grade readers, and their parents as well. And Rundell’s descriptions of food will make your mouth water. I think kids will love the rooftop adventures, and the message to hold on to your dreams, think outside the box, and believe.