Kelly Keaton, author of the Gods & Monsters series, has branched out into self-publishing with her New Adult Fantasy debut Embers in a Dark Frost. It’s my first experience with Keaton’s writing, and the book kept my interest with its likeable heroine and good mix of action, mythology and romance. 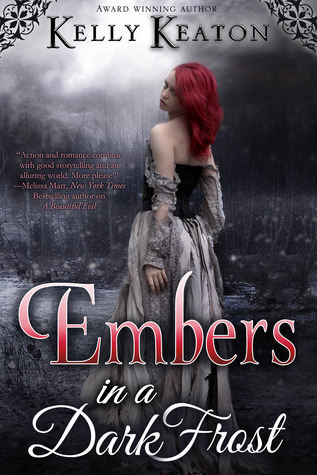 The Fire Breathers have come. The Underworld calls. A choice must be made…

With her feared half blood and flame-colored hair, DEIRA D’ANU is a constant reminder of human betrayal and the war that claimed the light from Innis Fail. Now, darkness and frost creep across the land, strengthening the Lord of the Underworld. War is imminent—an allegiance with the Fire Breathers is vital. When their champion, Balen, sees Deira, he believes she is the key to finding the light and stopping the dark frost.

But the Underworld calls to Deira, tempting her to turn her back on a world that never cared and betray the champion willing to sacrifice everything to keep her safe and save his world from darkness.

Embers in a Dark Frost has roots in Celtic mythology, and features a heroine who has always been a bit of an outcast. She is a half blood and her crimson hair makes that fact very obvious to others around her. She covers it with a veil so she doesn’t draw attention to herself. Deira leads a solitary life, and never felt worthy. She finds her purpose though and realizes she is part of a prophecy that could help bring light back into the dark land.

Deira embarks on a journey to follow her path. She’s scared but resolute and comes to realize that she may be valuable after all. She wants to champion the light, but the Underworld also entices her, and that intrigued me. Accompanying Deira on her journey is the strong, handsome and brave Balen. His faith in Deira gives her strength and he becomes an ally and a romantic interest. They have chemistry and some steamy new-adult style love scenes. Their connection fits in well with Deira’s personal growth- and the romance doesn’t detract from the mythology of the story, but rather enhances it.

The book is a quick read and I finished it in just a few hours. It kept my interest, where sometimes I struggle with mythology reads where they are overly descriptive or bogged down by the details. There was just enough detail to fill in the blanks for me about the character’s back-story and the conflict. There is one more book in the series, and I’m okay with where the book leaves off to set-up the sequel.

The book made me interested in reading Keaton’s other series, and has opened my mind to reading more new adult fantasy. This full-length novel is available in e-book format only now for only $3.99, and there are plans to release a paperback version in the future.

Find out more about the book here:

Make sure to enter the Rafflecopter Giveaway for your chance to win a $20 Amazon Gift Card!