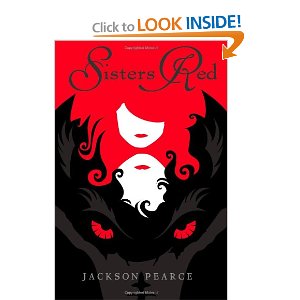 Description from the Publisher (Little, Brown):

Scarlet March lives to hunt the Fenris–the werewolves that took her eye when she was defending her sister Rosie from a brutal attack. Armed with a razor-sharp hatchet and blood-red cloak, Scarlett is an expert at luring and slaying the wolves. She’s determined to protect other young girls from a grisly death, and her raging heart will not rest until every single wolf is dead.

Rosie March once felt her bond with her sister was unbreakable. Owing Scarlett her life, Rosie hunts ferociously alongside her. But even as more girls’ bodies pile up in the city and the Fenris seem to be gaining power, Rosie dreams of a life beyond the wolves. She finds herself drawn to Silas, a young woodsman who is deadly with an ax and Scarlett’s only friend–but does loving him mean betraying her sister and all that they’ve worked for?

Sisters Red is the latest novel by author Jackson Pearce, who also wrote As You Wish. This book is a re-telling of Little Red Riding Hood set in present day, centered around two sisters Scarlett and Rosie. After a tragic Fenris/Wolf attack on their family, Scarlett vows to hunt Fenris to protect other would-be victims.

Scarlett is all about the hunt, and driven to protect her sister Rosie. She reminds me of Buffy the Vampire slayer, except she fights wolves/Fenris instead of vampires. Scarlett’s sister Rosie, however, is not as passionate about hunting Fenris. She would like something more in life, but stays hunting to make her sister happy. Scarlett and Rosie have a life-long woodsman friend named Silas who also is a part time hunter in their crew. Like Rosie, he is not as driven to the hunt as Scarlett.

Scarlett is a strong female character, fiercely protective, all she wants besides the hunt is to stay with Rosie and Silas. She is defensive about her appearance and how she believes she is perceived – she lost an eye in a battle with a Fenris and is covered with scars. Rosie is sweet and compassionate, and continues to hunt out of loyalty to her sister. She usually forgets to bring her weapons when going out, just when she needs them to fend off a Fenris. An attraction begins between Rosie and Silas, at the same time the Fenris attacks are increasing, and their lives starts to unravel.

Each chapter is told in alternating points of view by Scarlett and Rosie. It is their character’s story, against the backdrop of the threat of the Fenris.

There are some similarities / twists on Little Red Riding Hood.  Scarlett uses Rosie as bait to lure the Fenris, by acting flirty and giggly – she even wears a red cloak. But the sisters are deadly and brandish a hatchet to attack the Fenris. Silas as the woodsman is not the protector of the girls, he is not the strongest fighter, and is even known to take off and avoid his responsibility as a hunter. The sisters are the heroines in this tale.

Sisters Red is dark and scary, the Fenris appropriately sinister. There is not a lot of spotlight on the Fenris themselves, they are the outside threat in the character’s lives.

The story is fast-paced and action packed, focused on the bond between sisters, coming of age and finding your identity, the mystery of the Fenris and why their numbers are increasing, and romance.

I listened to the audiobook of this story and was impressed by the quality. I think the voice casting is spot on for Scarlett and Rosie and this added to my enjoyment of the story.

The author is writing a companion book to Sisters Red called Sweetly, due out June 2011.