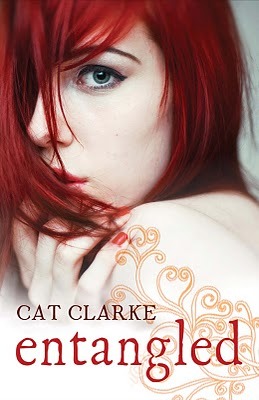 The same questions whirl round and round in my head: What does he want from me? How could I have let this happen? AM I GOING TO DIE? 17-year-old Grace wakes up in a white room, with table, pens and paper – and no clue how she got there. As Grace pours her tangled life onto the page, she is forced to remember everything she’s tried to forget. There’s falling hopelessly in love with the gorgeous Nat, and the unravelling of her relationship with her best friend Sal. But there’s something missing. As hard as she’s trying to remember, is there something she just can’t see? Grace must face the most important question of all. Why is she here? A story of dangerous secrets, intense friendships and electrifying attraction.

ENTANGLED is author Cat Clarke’s debut novel. It is the story of Grace, a suicidal teen, who suddenly finds herself being held captive in a white room by a mysterious man named Ethan. She is supplied with a table, paper and pens. She has no remembrance of how she arrived in this room. She decides to make the best of the situation and writes down her complicated life story.

I picked up this book because the cover intrigued me, and I felt like reading something contemporary. The book is gripping and intense. As it starts out, Grace has been abducted and I was worried about what might happen to her. As she sits down to write her story I became increasingly interested in her messy past and what led her to contemplate taking her own life.

Grace as a character is complicated and rough around the edges, yet vulnerable at times. She is a party girl and drinks, sleeps around and cuts herself. She does not have much in the way of family support. Grace has never had many friends before she meets Sal, who she begins an intense friendship with. Grace is a mess and heading on a downward spiral when she meets and falls hard for Nat. She feels that her life is turning around and that she has it all with her loyal best friend Sal and gorgeous boyfriend Nat.

The story is told in first person and is difficult to read sometimes, as Grace’s head is a dark place to be. The plot is full of pain and teenage angst, and Grace is brash and tough. I did ultimately feel sympathetic towards her, though her manner makes it hard at times. The character of Sal seemed well intentioned but I did not feel that I got to know her that well. Their intense friendship and falling out is one of the major themes of the book.  Nat and Grace have a torrid love affair that makes Grace feel wanted and loved, and hopeful that her life is turning around. Nat’s brother Devon is a breakout character who I wish would have appeared more in the book.

The white room scenes helped to move the story along and provided a break between the flashbacks. These scenes and the character of Ethan kept me guessing what was going to happen next.

It is hard to put this book down once you are getting close to the end. The story has many twists and turns and surprises. Although I did have an idea how it was going to end, I still enjoyed the book to its conclusion. I liked this debut novel and felt that the author nailed Grace’s troubled voice, and also succeeded in sharing the intensities of friendships and relationships, and depression. The writing is well done, with a thoughtful and consuming plot. Recommended for older teens or adults due to the explicit themes.

ENTANGLED is a British novel that has not been released in the US. You can find it through Alibris or Amazon Marketplace.

For more information about the author, visit her online:

2 thoughts on “Entangled by Cat Clarke”