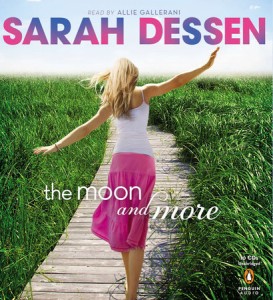 Also by this author: Along for the Ride, Saint Anything, Lock and Key

Luke is the perfect boyfriend: handsome, kind, fun. He and Emaline have been together all through high school in Colby, the beach town where they both grew up. But now, in the summer before college, Emaline wonders if perfect is good enough.Enter Theo, a super-ambitious outsider, a New Yorker assisting on a documentary film about a reclusive local artist. Theo's sophisticated, exciting, and, best of all, he thinks Emaline is much too smart for Colby.Emaline's mostly-absentee father, too, thinks Emaline should have a bigger life, and he's convinced that an Ivy League education is the only route to realizing her potential. Emaline is attracted to the bright future that Theo and her father promise. But she also clings to the deep roots of her loving mother, stepfather, and sisters. Can she ignore the pull of the happily familiar world of Colby?Emaline wants the moon and more, but how can she balance where she comes from with where she's going?Sarah Dessen's devoted fans will welcome this story of romance, yearning, and, finally, empowerment. It could only happen in the summer.

Sarah Dessen’s books are so summery and comforting. I’ve only been reading her books for a year, but I already feel so attached to the Colby beach town, and seeing the familiar characters pop up. Dessen’s books give off a relaxed vibe, but also cover relatable topics like family and romantic relationships, workplace drama and college aspirations. Dessen was writing New Adult before it was a thing, and her YA books feature characters that are a little bit older. The title works in really sweetly with the story too, and reminded me of something my grandmother used to say.

I’ve only read Dessen’s books that take place in the beach town of Colby, and this book features a Colby native, rather than a beach visitor. Emaline works at Colby Realty and she knows the town inside and out. It’s the summer before college and she’s having problems with her high school boyfriend, her estranged biological father is in town, and she gets recruited into helping a documentary crew get close to their reluctant artist subject.

The summer before college is tricky for relationships. Will you grow apart or stay together? Emaline and Luke love each other but are starting to drift apart a little and wanting different things. A new guy in town, Theo, has a lot of desirable qualities she wishes Luke had and that brings some uncertainty to Emaline’s life.

The book also talks about fathers vs. dads- Emaline has a dad, and is trying to decide if she wants to have a relationship with her biological father. There’s some interesting family dynamics with Emaline and her mom and sisters, and half-brother.

One perspective I liked too is the idea of choosing a college, and making the choice that’s right for you. I just felt that Emaline’s financial considerations were very realistic, and I liked the mature way she handled things.

I listened to the audiobook of The Moon and More, read by Allie Gallerani. It’s my first experience with Gallerani’s narration, and I think she inhabited the characters well and sounded age appropriate for Emaline. Her pace is good, and she uses different voices for each character. The male and female voices sounded natural, from the kid voices to the parents. Gallerani has a pleasant voice to listen to, and I’d listen to more YA audiobooks from her.

The pace in The Moon and More is relaxed, and like Dessen’s other books it’s a quiet book that sets a vacation mood. There aren’t a lot of shocks and awes or big reveals, but it is a nice slice of life relatable story. If you like the Dessen formula, you’ll probably like The Moon and More for a new look at Colby. I’m curious to see what Dessen would do with another genre or different formula, but I’m happy revisiting Colby as well.