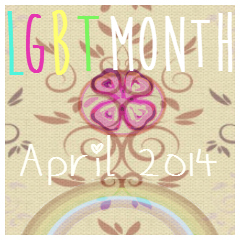 Continuing with the LGBT April festivities, today I’m highlighting some of the YA LGBT 2014 books I have on my radar. (LGBT Month is brought to you by Laura @ Laura Plus Books and Cayce @ Fighting Dreamer and there’s still time to sign up—> here.)

Disclaimer: This list is not comprehensive by any means, but includes the books that caught my eye. As I have not read them yet, there could be some inaccuracies in the descriptions below.

The Summer I Wasn’t Me by Jessica Verdi – A girl is sent to a gay-to-straight conversion camp after her mom reads her journal.

Noggin by John Corey Whaley – This contemporary/sci-fi mashup (?) is about a 16-year old cancer stricken boy who gets a new body for his head that’s been frozen for five years.

Great by Sara Benincasa – This is a modern retelling of The Great Gatsby with an LGBT twist.

Far From You by Tess Sharpe – This is a mystery featuring a bisexual main character.

Everything Leads to You by Nina LaCour – LaCour’s latest is set in the LA film industry, and features a lesbian protagonist.

One Man Guy by Michael Barakiva – This book is about family, love, and Armenian culture.

Guardian by Alex London – The sequel to Proxy- this series features a gay protagonist.

Dirty London by Kelley York – London lets everyone think she’s the girlfriend of a popular guy at school, but they are both secretly gay.

My Best Friend, Maybe by Caela Carter – This book is about friendship, love and sexuality and features a vacation to Greece.

Lies My Girlfriend Told Me by Julie Ann Peters  – Alix’s girlfriend dies and leaves behind clues about her secret relationship.

Otherbound by Corinne Duyis  – Fantasy is not usually my thing, but this gender bending book sounds like it has it all – including a PoC main character, persons with disabilities, and gay main characters.

Fan Art by Sarah Tregay – A coming out story, about a guy who falls for his best friend.

The Misadventures of the Family Fletcher by Dana Alison Levy – This MG book features a family with two dads and their four adopted boys. Read the description- it sounds really fun!

Rumble by Ellen Hopkins – Hopkins’ latest book is about an atheist in love with a Christian girl. Hopkins states that Rumble features gay characters as well.

I’ll Give You the Sun by Jandy Nelson – This is a story about twins and an event that tears them apart. One of the twins is gay, and they each share their story.

Lies We Tell Ourselves by Robin Talley – This story is set in 1959 and covers race and sexual orientation issues.

The Boy I Love by Nina de Gramont – This book is about secrets, love and prejudice.

Do any of these books strike your fancy? Let me know your thoughts if you’ve read any of these yet, or if you know of any books missing from the list. Look for a Fall/Winter update later this year!