Paula Stokes’ THE ART OF LAINEY is on sale today! *throws confetti* This is a fun book for lazy hot summer days, and perfect for YA contemporary romance fans. I am reading this book now and it is such a treat. The premise is that a girl uses The Art of War to get back the boyfriend that dumped her, but somewhere along the way the game changes. I’ll have a review up soon, but in the meantime here are some goodies to get you excited about The Art of Lainey: 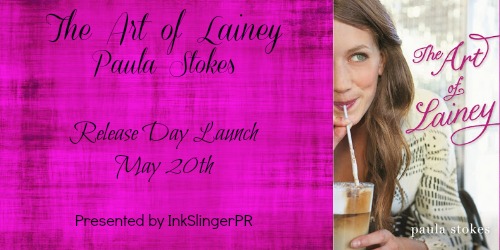 Check out a terrific excerpt and enter the giveaway below!

The music pitches and swells, violin and guitars, drumbeats and thudding bass. As I sway back and forth in front of the stage, it feels like being in the eye of a tornado, where it’s calm, but everything is going crazy whirling around me. I can’t stop looking at Micah, at the way the lights reflect off his mohawk, at the way he’s completely lost in the storm of overlapping chords.

I see every part of him, tiny pieces I never knew existed. The slight bend in his nose, the wedge-shaped scar on his right temple, the outline of his bicep hiding beneath the pyramid tattoo. His lips part, just barely, when he exhales. As I imagine the invisible mist of his breath hanging in the air, I inch closer to him. Here, in the strange blue light, while the bass pulses and pounds, all I can think about is touching him. Our fingertips brush. A shockwave courses through me. I want to grab him and pull him into my calm spot, closing my eyes and kissing him while the world spins topsy-turvy around us.

My thoughts feel hot inside my head, like they should be radiating a laser beam across the club, but Micah’s eyes are still closed, his body loose. He’s oblivious to the fact I’m thinking about kissing him. He has no idea my eyes are skimming their way down the lines of his body. His cheekbones. His beard stubble. The ridge of muscle connecting his jaw to the center of his chest. The faintest trace of sweat glistens where his neck meets his right shoulder. I want to touch my lips to it.

This is crazy. It’s Micah. I don’t like Micah. He doesn’t like me. We have about as much in common as, well, nothing. I sneak another glimpse at him. He’s still completely entranced by the song. He’s still completely kissable. It has to be the beer, or the music, the violins and guitars and electronic pulsing, the whole otherworldly quality to this song. Or maybe it’s just because I’m not myself here, and I don’t have to obey the rules of Lainey.

I sub back into the game a few minutes later and stay through the end of the half. It’s still 1-0. The Yellow Jackets tie it up on a breakaway goal in the second half. At this point I’m running from one end of the field to the other, playing more defense than any striker forward ought to be playing. I can’t help it. It feels so good to be in the game.

Matt Clifton saves a shot on goal and drop-kicks the ball in my direction. I dribble up field, out maneuvering two of the other team’s defenders. I pass the ball to Jason who sends it across to our right wing forward. The defense kicks the ball out of bounds and we get a corner kick. Jason goes to take it. I position myself in front of the goal, dancing back and forth as I vie for position with one of the Yellow Jacket fullbacks.

It’s a beautiful kick—high and strong, and it’s coming right at me. The other players, the shouting, the movement, they all fade into the background as I keep my eyes locked on the ball. Angling my body just slightly, I propel all five feet and eight inches of myself into the air at exactly the right moment—I think, I hope—and the crown of my head connects squarely with the ball. The players around me all turn to watch as it arcs through the air…

I flip on the radio as soon as Leo fires up the engine. I hit the tuning arrow up until it lands on the station Micah put on for the ride home from the baseball game.

Leo looks over at me. “I didn’t know you liked this kind of music,” he says.

Me neither, but I do. Kind of, anyway. “I’ve been branching out. Anything gets old if you listen to it twenty-four seven, you know?”

I don’t answer. If you asked me whether I was the type of person who liked trying new things or preferred sticking with what was familiar, I would have told you I’m the second girl. The if –it-aint-broke-don’t-fix-it girl. I also would have told you plays were lame. It suddenly occurs to me that I don’t seem to know very much about…me. It’s a weird feeling, like maybe a stranger is inhabiting my body. Or maybe a stranger was, and I kicked her out.

The Art of Lainey Synopsis:

Soccer star Lainey Mitchell is gearing up to spend an epic summer with her amazing boyfriend, Jason, when he suddenly breaks up with her—no reasons, no warning, and in public no less! Lainey is more than crushed, but with help from her friend Bianca, she resolves to do whatever it takes to get Jason back.

And that’s when the girls stumble across a copy of The Art of War. With just one glance, they’re sure they can use the book to lure Jason back into Lainey’s arms. So Lainey channels her inner warlord, recruiting spies to gather intel and persuading her coworker Micah to pose as her new boyfriend to make Jason jealous. After a few “dates”, it looks like her plan is going to work! But now her relationship with Micah is starting to feel like more than just a game.

Paula Stokes is half writer, half RN, and totally thrilled to be part of the world of YA literature. She grew up in St. Louis, Missouri where she graduated from Washington University and the Goldfarb School of Nursing. When she’s not writing, she’s kayaking, hiking, reading, or seeking out new adventures in faraway lands. Paula loves interacting with readers! Find her online at www.authorpaulastokes.com or on twitter as @pstokesbooks.

Paula has an awesome swag pack and a signed copy of The Art of Lainey!!! (Open Internationally!)
a Rafflecopter giveaway