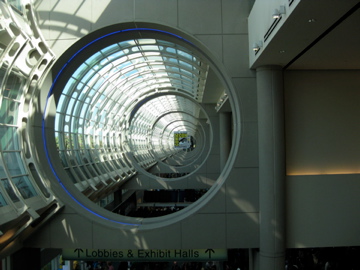 This is the last day of Comic-Con, time to pack up and head to the convention center one last time. Sunday there were a number of huge TV panels scheduled for Hall H: Glee, Dr. Who, and Supernatural. Of the three, I would have loved to attend the Glee panel as I have the last two years. Unfortunately there was a conflict with an anticipated YA book panel and my daughter and I decided to regretfully skip Glee this year in favor of that. Apparently there were tons of fans turned away from the Glee panel anyway, probably due to the combination of the three TV fandom’s wanting to secure their spot in the Hall. Hopefully I’ll get to try again for Glee next year!

My daughter and I headed to the convention center to line up for the “What’s Hot in Young Adult Fiction” panel with dozens of other YA book fans. We got in the room with a good spot towards the front, and chatted with other YA fans about books and the goings on of the day. This panel featured many of my favorite authors and included Andrea Cremer, Amanda Hocking, Tahereh Mafi, Stephanie Perkins, Laini Taylor and Kiersten White. That’s an all-star panel, right?

Author Nathan Bransford moderated the panel, and he asked the guests a series of questions about writing for young adults. Amanda Hocking chimed in that she thought that 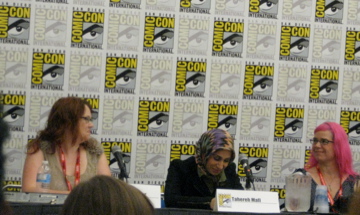 recalling first moments make YA appealing to adults. The panel also stated that they don’t talk down or censor when writing for young adults. They believe that kids should not be underestimated; if you are open with them they will make the appropriate book choices for themselves. Parents are the gatekeepers who should monitor their children’s reading, and usually kids will be able to choose books with the appropriate level of darkness or maturity for themselves. Tahereh Mafi said that kids could feel like they are not alone when they read books about someone going through a difficult time, or kids can also learn empathy through their reading. The panel gave writing advice to aspiring authors and encourages writing from your heart and not try to emulate others style or trends. Kiersten White wrote a couple books on her road to publication before Paranormalcy, but things fell into place when she stayed true to herself and her voice. Stephanie Perkins advised to be persistent but be good to yourself. Regarding social media, the panel said it’s good to choose the outlet that is right for you. It can be important for your self-promotion but consider author Suzanne Collins who hardly has any online presence and that has certainly not hurt her book sales. This was an awesome panel, and afterwards the authors held a book signing.

At the book signing, ARC’s of Shatter Me and Daughter of Smoke and Bone were given out to attendees. Unfortunately, there were no Lola and the Boy Next Door copies to be found in all of Comic-Con. My daughter is a big fan of Stephanie Perkins and she got to get her book signed and take a picture with her. They both have blue streaks in their hair so it was cute to see them together.

After the signing we got a tip from some fellow book fans that Kami Garcia and Margaret Stohl were doing a t-shirt signing, so we dashed over there to get a spot in line. Next we walked around the exhibit hall one last time before heading to the last panel of the day.

The “High School Bites” panel featured another more all-star authors including Scott Westerfeld, Laini Taylor, Margaret Stohl, Kami Garcia, Debbie Viguie, Anna Carey, and Heather Brewer. They talked about their books, and discussed whether they would ever want to return to their high school years. I believe everyone on the panel said no to that with the exception of Debbie Viguie. Scott Westerfeld said he would like to give himself a code word in case he has to time travel back to high school. He also announced at Comic-Con that his Uglies series would be heading to the big screen with a film adaptation in the works. The panel talked about trends such as dystopian books. Anna Carey said that she was inspired by the events of September 11 to write the dystopian book Eve. She was a freshman at NYU at the time of the tragedy. Heather Brewer stated that her high school years were very rough, and she worked through that experience by writing the Vladimir Tod series. There was a young boy at the panel who is a big fan of that series and asked Heather if there were plans for a movie. She stated that she couldn’t say yes or no at this point, but she did talk about her new spin-off series called The Slayer Chronicles. These books will 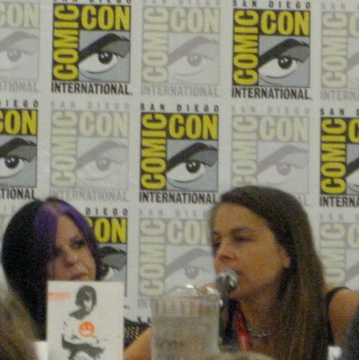 take place in the summers between each Vladmir Tod school year novel. This was another interesting panel that also led into an author signing.

We got Eve signed by Anna Carey, but I unfortunately forgot to bring my copies of the Uglies series to be signed. It gets heavy carrying books around at Comic-Con. Maybe I’ll get another opportunity next year.

That wraps up my Comic-Con adventure! We had tons of fun, it was good family bonding time, and I really enjoyed meeting other bookish fans, attending panels and meeting authors. I did not get to do everything I set out to do, but it’s almost impossible anyway. We did not end up finding the elusive Mockingjay pin unfortunately, but I’m sure they will be plentiful when the movie arrives. I did come home sick with a cough and sore throat, probably from not taking great care of myself over the week. Looking forward to getting some reading done now. Thanks for letting me ramble on about my Comic-Con experiences!

The giveaway for the ARC of Clive Barker’s Absolute Midnight (Abarat #3) & YA book swag has ended and the winner has been notified. Thanks to everyone who entered!