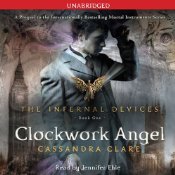 I’m a big fan of Cassandra Clare’s The Mortal Instruments series but for some reason have been slow to pick up the prequel series The Infernal Devices. I tried reading Clockwork Angel when it was first released but didn’t really get into it at the time, and finally decided to try the audiobook.  I think that was the right choice. Clockwork Angel made me feel at home with Clare’s writing style, the superb world building, familiar terminology and the paranormal world that makes up TMI. Like City of Bones, I felt the story was slow at first, though by the end I felt more invested in the characters and eager to continue on with the series. The audiobook did make the experience more enjoyable with Jennifer Ehle’s outstanding narration, though due to the length of the audiobook and slow pace it still took me over two weeks to get through it.

Clockwork Angel is set in Victorian London, 130 years prior to the world of The Mortal Instruments. Tessa Gray goes to London to find her brother and gets mixed up with the Downworlders (supernatural beings) and finds she has her own supernatural ability and can transform into other people at will. She’s taken in by the Shadowhunters (warriors who fight the Downworlders to protect the mundanes/humans) who offer to help her find her brother if she users her talent to help them.

The Victorian London setting makes a charming backdrop for the story, and Clare has done her research and provided a detailed look at the time frame.  The manners, locations, horse drawn carriages, and wardrobes set the scene perfectly.

The story is told in third person narration mainly through Tessa’s perspective. Tessa is scared and dealing with a lot of change in her life. She’s still coming to terms with this new world and how she wants to use her talents. The other supernatural beings such as Magnus Bane and the other Shadowhunters such as Will and Jem bring more humor and energy to the story with their snark and banter. There is a villain who is after Tessa, and this is a mystery with many twists and turns throughout the book.

Jennifer Ehle narrates the audiobook and gives each character a distinct voice and accent. And there are a lot of characters so I was impressed that she could keep track of them all. It was like listening to a play, the way the characters came to life. Her Tessa voice sounds appropriately young, proper and cautious. Ehle’s other female voices are easy to distinguish from each other and the male voices also sound convincing. One minor quibble it is that the narration was a little too slow for my taste. If I were reading the actual book I would have gotten through it much faster. At some points I wished I were reading so I could skim through the slower parts, which is impossible in the audio format. Even still, I would not hesitate to pick up another Ehle narrated audiobook.

The ending of the book did make me interested to pick up Clockwork Prince, the next book in the series. Although so far I prefer The Mortal Instruments series, The Infernal Devices is a good companion series and has a lot of potential. The blog community seems to like Clockwork Prince even better than Clockwork Angel, so I’m ready to be blown away. I have the audiobook in hand, and am eager to see how the new narrators handle the material.