When you think of Comic-Con, you may think of comics, or the next big movie or TV show promotion. But another category that’s become increasingly popular at Comic-Con is books. Publisher’s come to Comic-Con each year loaded with the latest buzz titles. Comic-Con attendees can learn about new releases at publisher panels, meet authors at signings, or pick up the latest book giveaway. It’s interesting to see the books that are promoted each year, and to see which titles attendees are most excited about. Some of the lines at publisher’s booths get so long security has to get involved to help get things in control. Book fans should take note that Comic-Con is a great place to hear about new releases to get excited for. The hard part is getting hold of a badge to get in.

I wanted to share the book titles that I picked up this year at Comic-Con. And to make it more fun, I’m holding a pre-order giveaway so that two readers can win their choice of book from the list.

These are the books I picked up this year at Comic-Con: 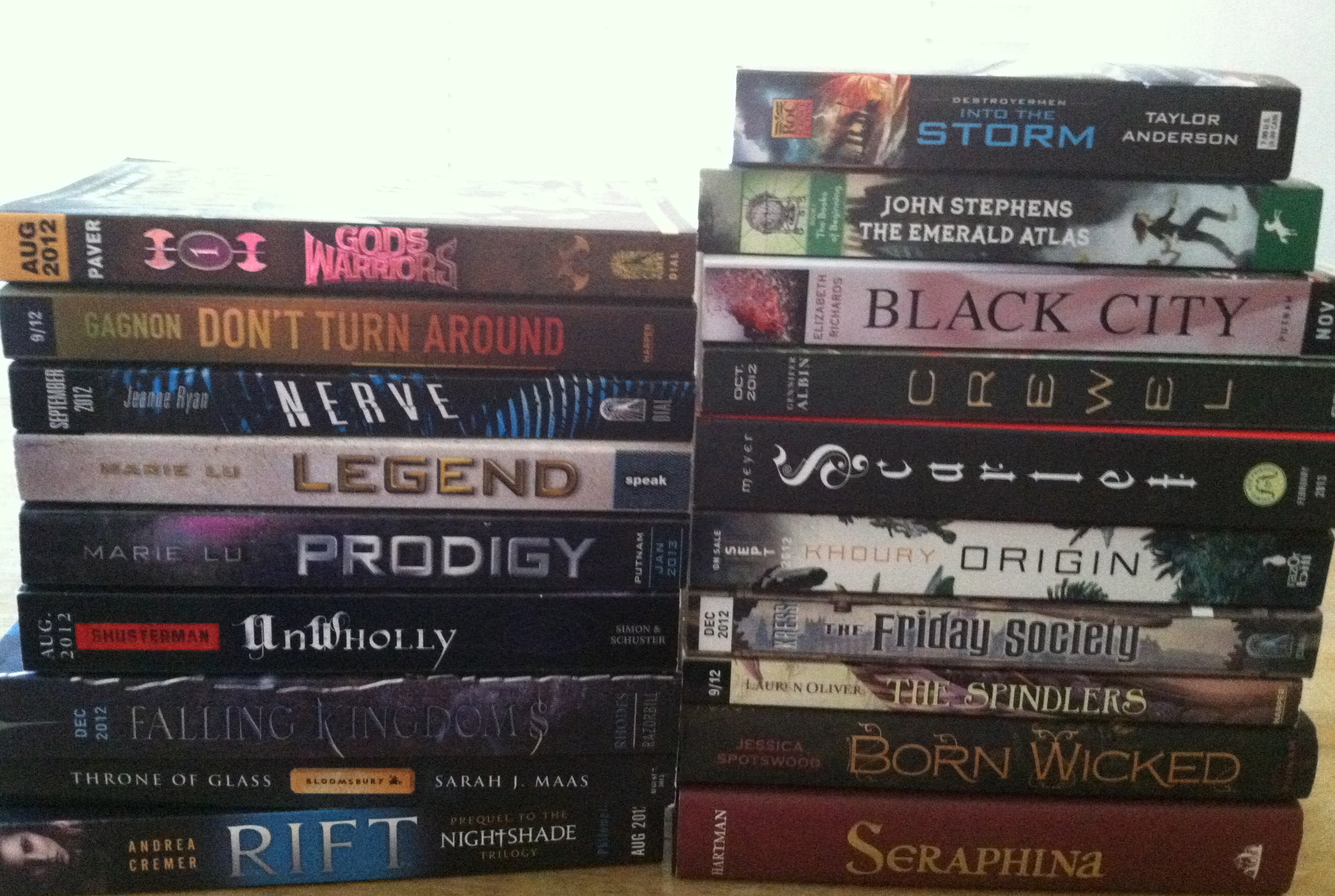 Read more about the titles I received below:

1. Gods and Warriors by Michelle Paver – Dial, Aug. 28 – This is a fantasy adventure middle grade book that should appeal to fans of Percy Jackson.

2. Don’t Turn Around by Michelle Gagnon – Harper Teen, Aug 28 – A thriller about a computer hacker who is being hunted by a dangerous enemy.

3. Nerve by Jeanne Ryan – Dial, Sept. 13 – This one has a cool premise – A girl is chosen to be a player in an anonymous game of dares that’s broadcast live online. The stakes get raised higher and higher as the game becomes more dangerous.

4. Legend by Marie Lu – This one is already out of course, but it was heavily promoted at Comic-Con with multiple signings and book giveaways.

7. Falling Kingdoms by Morgan Rhodes – Razorbill, Dec. 11 – High fantasy described as a YA Game of Thrones. Told in multiple POV.

8. Throne of Glass by Sarah J. Maas – Bloomsbury, Aug. 7 – A romantic fantasy with a strong heroine.

10. Into the Storm by Taylor Anderson – Roc, 2008 – The first installment of the Destroyermen series- an alternate reality World War II book.

11. The Emerald Atlas by John Stephens – Random House, 2011 – The first book in the Books of Beginning fantasy series.

12. Black City by Elizabeth Richards – Putnam, Nov. 13 – A post-apocalyptic love story with a paranormal element. Love the cover of this one.

13. Crewel by Gennifer Albin – FSG, Oct. 16 – A dystopia about a girl who has the ability to weave time and is chosen to be a Spinster.

14. Scarlet by Marissa Meyer – Feiwel and Friends, Feb. 2013 —  The second book in The Lunar Chronicles series. It centers on Little Red Riding Hood but Cinder will be around too.

16. The Friday Society by Adrienne Kress – Dial, Dec. 6 – A witty YA steampunk murder mystery. This one sounds really fun.

17. The Spindlers by Lauren Oliver – HarperCollins, Oct. 2 – Looks like another good fantasy middle grade book from Lauren Oliver! The cover is so cute.

18. Born Wicked by Jessica Spotswood – Putnam, Out now – An historical fiction book about the Cahill family of witches.

Since I kind of forgot about my two-year blogoversary that occurred in June- I’m making this my blogoversary giveaway. Two readers will win their book of choice from the list above. It will be a finished copy, so note the release dates above. You may have some time to wait for your preorder to arrive depending on the book you choose.

Thanks for reading my blog – I’ve had so much fun with it over the past two years and getting to know all of you. Thanks also for all the great book recommendations, comments, and book chat over the past couple years. I appreciate all of you!

The Giveaway has ended – Congrats to Christa who won Throne of Glass and Nafiza who won a preorder of Scarlet.

14 thoughts on “Books Featured at Comic-Con and Blogoversary Giveaway”