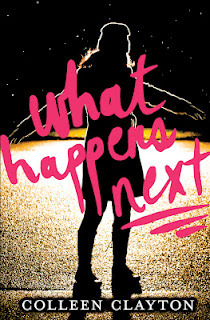 In What Happens Next, Cassidy (Sid) is hiding a secret that’s eating away at her quite literally. She suffers a traumatic event on a school ski trip and can’t bring herself to tell anyone about it. She becomes isolated from her friends and resorts to unhealthy methods of coping. A new friend (Corey) helps bring the light back into her life, though she still needs to face her demons eventually.

Sid’s story is hard to stomach at times, but I think that’s because it rings so true. She’s so vulnerable and it’s difficult to read about the sexual assault, even though the details are a mystery – the effect it leaves on Sid is shattering. Her already low self-esteem takes a beating, and she can’t deal with the event at all, choosing to punish herself instead. I wanted her to confide in the people in her life that obviously cared about her, but at the same time her behavior was understandable.

The voice of Sid is strong and complicated and heartbreaking. The things she goes through with her friends and the bullying and body image struggles are hard hitting but relatable and relevant. She puts on such a façade for the people around her that the whole book I was just waiting for her to finally crack.

The romance with Sid and Corey is very sweet, and Corey is a great guy for her, and came along at just the right time. I liked that both Sid and Corey have dealt with rumors and others incorrect perceptions of them and they can see past that with each other.

The difficult topics are addressed with sensitivity and realism. And I think a lot of girls reading this will be able to relate to Sid. I was happy with the book’s conclusion though I would have liked to follow the characters a little bit longer, maybe with an epilogue. So glad I read this one – Clayton is a great new voice in contemporary YA.

What Happens Next is Colleen Clayton’s debut novel and it came out in October 2012. I borrowed a copy from my local library, and I actually finished it before the due date! Read more about the book on Goodreads.

15 thoughts on “What Happens Next by Colleen Clayton Book Review”