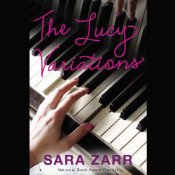 Audiobook: The Lucy Variations by Sara Zarr, published by Hachette Audio, May 7, 2013

The Lucy Variations called out to me for a couple reasons. Obviously I share my name with the title character, but I can also relate to her struggles with her musician identity very much. I have never shared this with you guys but I played the flute for about 13 years.  Orchestra, band, rehearsals, daily practices, the works. I wasn’t a famous child prodigy of course like book-Lucy but it did take up a lot of my free time, and yeah, sometimes I resented it, even though I loved the music too.

Sara Zarr’s How To Save a Life is one of my favorite books and I’m slowly making my way through her catalog.  I was lucky enough to win a signed copy of The Lucy Variations from Debbi @ DEBtastic Reads, and I also have a copy of the audiobook so I alternated between reading and listening.

In The Lucy Variations, sixteen-year-old piano virtuoso Lucy walks out on an important competition in Prague and abruptly quits playing altogether.  Her family keeps a family tragedy secret from her so she doesn’t lose focus on the competition, and this is the last straw for Lucy.  Her grandfather and mother totally micro-manage her career and she’s had enough. Eight months later, Lucy hasn’t played a note and now she’s passed the piano bench on to her younger brother Gus.  When Gus’s elderly tutor dies during a piano lesson, a new instructor named Will is brought in.

Lucy didn’t think her days of playing the piano were over exactly but since her controlling grandfather washed his hands of her she feels cut off from the piano. Now she has time to explore San Francisco with her friends, hang out with Gus, and decide what else she wants to do with her life.  The new piano tutor Will is familiar with Lucy’s career and wants to help her rediscover her love for music on her own terms. And things get a little messy between them.

The Beck-Moreau family is very wealthy and Lucy has a lot of options available to her. I felt for her that it was all or nothing with the piano and I wanted her to get her mojo back. But on the other hand, she’s a little infuriating at times. She can be a pretty bad friend, and her morals are sketchy as well. I cut her some slack due to her horrible parental role models- her grandfather is truly awful and her parents don’t do anything about it. Her mother even gives her the third degree about the elderly piano teachers death as if she was somehow to blame. So in terms of the characters it wasn’t always easy to connect though the story is compelling.

The author, Sara Zarr herself, narrates the audiobook.  She’s actually read a few of her books though this is the first one I’ve listened to. One thing that’s very cool about the audiobook production is that short snippets of music are included in the story. So when Lucy is talking about performing a piece of music, the piano parts are overlaid in the story. I get nervous when authors narrate their books since usually their forte is writing, not voice acting.  But on the other hand, they know the story inside and out so sometimes it works out. Zarr’s reading is low-key and her voice is pleasant to listen to. She’s subtle with the character voices, but I was actually impressed with how much personality she puts into the characters without overdoing it. She makes the characters come alive but doesn’t sound unnatural doing it, so kudos to Zarr. I think I’ll check out her narration on Story of a Girl next. 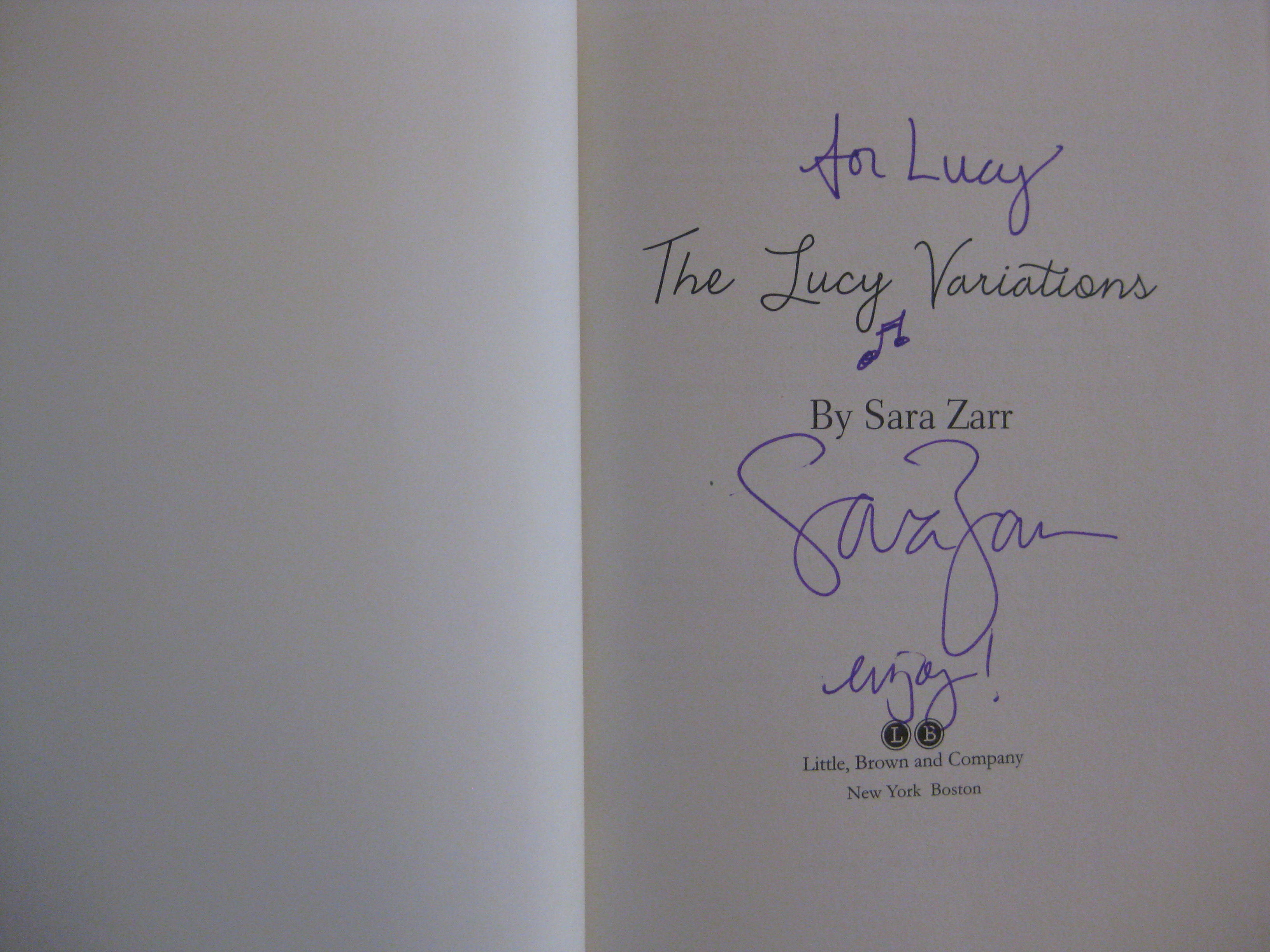 The hardcover is really pretty and the different parts of the book are labeled with musical terms like Tempo Regato, and Con Brio, Con Fuoco, as well as their translations. Also, when there are flashbacks in the book they are clearly marked as Intermezzo chapters. This transition is easier to follow in the book than the audiobook. The book is also artfully decorated with musical notes to carry the theme throughout. I was glad to have the book to refer to when I was listening.

I think if you have an interest in contemporary YA with a musical theme you’ll especially appreciate this book.  I didn’t love it as much as How to Save a Life, though it did help me work through my own feelings about my musician past and I could relate to Lucy’s struggle for balance.

Check out some behind-the-scenes pictures and background info on the audiobook production of The Lucy Variations from Sara Zarr here.