I read In the Band for Cybils but it’s a book that was on my radar anyway because I gravitate to music-themed books. In the Band is about a girl drummer who has to forfeit her big out of state college plans to stay home and help take care of her mother and little sister after her parents’ separation. Riley gets the chance to be the drummer for a popular college band (not her usual marching band) and falls in hate/lust with the guitarist of Luminescent Juliet, Romeo. This book has YA/NA crossover appeal and deals with family drama, romance, and following your dreams. It doesn’t break new ground in NA but it’s an entertaining read nonetheless. 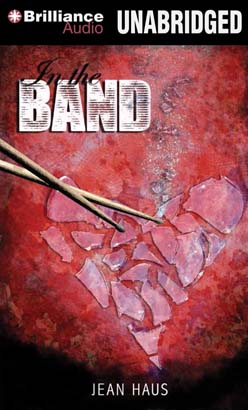 Being popular in the college music scene doesn’t solve all your problems; at least that’s what the hot musicians of indie band Luminescent Juliet discover.

In this compelling novel, trouble begins when eighteen-year-old Riley, trying to regain her rhythm after throwing away her percussion scholarship to a top school, wins an audition to become the band’s new drummer. This sets her on a collision course with Romeo, the band’s sexy dark-haired guitarist, whose ambitions do not include performing with a girl. Luckily for Riley, all her problems seem to evaporate when she’s behind the drums. Yet she can’t ignore reality as the band’s artistic power struggles increase — and the dynamic between her and Romeo edges from dislike into overwhelming attraction. If the two can’t find a way to be together without breaking up the band and wreaking havoc on the lives of those around them, they’ll lose not just their chance to make music, but their chance for a future together.

In the Band first came out last year as a self-published novel, but was recently edited and re-launched with Amazon Skyscape. Early reviews mention some grammar issues but it all seemed cleaned up to me.

Readers who like rock band romance will like the different personalities featured in the band Luminescent Juliet. Romeo the guitarist is the leader and comes off as a jerk but has more layers than it seems. Riley is a powerful drummer that blows everyone away when she plays. I responded to her love and knowledge of music and wanted to see her succeed.

Riley takes on a lot of responsibility for someone who’s just turning 19. At that age she should be focused on her own life and career goals, but she feels responsible for her depressed mother and helps to care for her younger sister. She gives up a lot and it didn’t seem fair to her, but it’s admirable that she cares about her family so much. Some of the family struggles seemed repetitive after a while and I wanted Riley to put her foot down.

The Romeo and Riley flirtation starts off rough but soon Romeo proves himself to be a stand-up guy in addition to a great musician. The pair has great chemistry, but I like that the relationship focused on them as individuals as well.

I listened to the audiobook, performed by Kate Rudd (The Fault in Our Stars.) Rudd is a believable Riley, sounds age appropriate, and emotional as the story dictates. She does well with the different personalities of the guys in the band, Riley’s friends, and parents to make them sound distinct. I was confused at first because the audiobook lists Kate Rudd and Luke Daniels, but the book is told from Riley’s POV. However, Luke Daniels narrates one bonus chapter at the end of the book, Riley’s band audition, from Romeo’s POV. Kate Rudd performs the other 99% of the book. I got used to Rudd’s voice for Romeo, so it was jarring to hear Daniels’ take at first, but the bonus chapter was a nice touch.

In the Band should appeal to readers of contemporary fiction, New Adult, and rock star romance. It’s strong on romance, but the family and college/music storylines take it up a notch. The companion book, Ink My Heart, about Luminescent Juliet’s lead singer Justin, is out now.

In the Band is a YA Fiction Cybils nominee.

2 thoughts on “In the Band Audiobook Review”