Julie Anne Peters’ Define “Normal” first came out in 2000, and it was her first YA offering after writing many Middle Grade books. The book is now available as an audiobook for the first time. Define “Normal” is about two students – the “Priss” and the “Punk” brought together by peer counseling. The message of thee book about not judging a book by the cover is a good one though the book shows its age a bit in terms of slang usage. 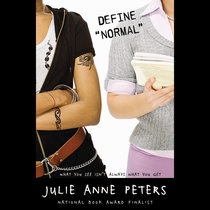 This is the second book I’ve read by Julie Anne Peters, after reading Lies My Girlfriend Told Me last month. The story is that Antonia is a good student who is falling a little behind in school because she’s picking up the slack at home. Her mom is depressed and confined to her bed, and can’t manage the household or take care of Antonia’s younger brothers. Antonia gets the opportunity to be a peer counselor and takes that on since it will look good on her college applications. But, she’s paired with someone who seems like her total opposite- Jazz. Jazz has a punk attitude and the clothes to match. Antonia doesn’t think she’s up to the challenge of counseling Jazz- they are just too different. But, as time goes on, Antonia’s own reality starts to implode and the counseling sessions are the only thing keeping her sane.

This book is about friendship and family, but also about the assumptions we make about people based on outward appearances. On the surface Antonia looks like she’s got it all together, but she is barely hanging on. While Jazz looks like a troublemaker, though she excels academically and in other areas. The pair are resistant to work together at first but end up making a big difference in each other’s lives.

Define “Normal” was written in 2000 so some of the technology and slang references are obviously not up to date. Jazz uses some slang I haven’t come across before- she is particularly fond of using the word “bode.” I still don’t know what it means. Though the terminology is a little outdated, the message is still relatable.

I listened to the audiobook, performed by Christine Lakin. She as always does a good job with the characters, and her vocal choice for Jazz particularly stands out. She really delivers Jazz’s colorful, overbearing personality. Her Antonia is a nice contrast as she has a more muted personality. The production sounds crisp and clear, and Lakin’s pacing is consistent and her voice is enjoyable to listen to. I probably would not have had the chance to read this if not for the audiobook and I think Lakin enhances Julie Anne Peters’ words. The audiobook also includes a sample of Peters’ latest book Lies My Girlfriend Told Me. Check out a sample:

I’d recommend this book for YA’s interested in reading about friendship and family drama. I think it would make for an interesting class discussion for middle schoolers.

Mailbox Monday #18
In My Mailbox (47)
Waiting On Ink Is Thicker Than Water by Amy Spalding
Mailbox Monday (107)
Spotlight and Giveaway: SHADOW SCALE by Rachel Hartman